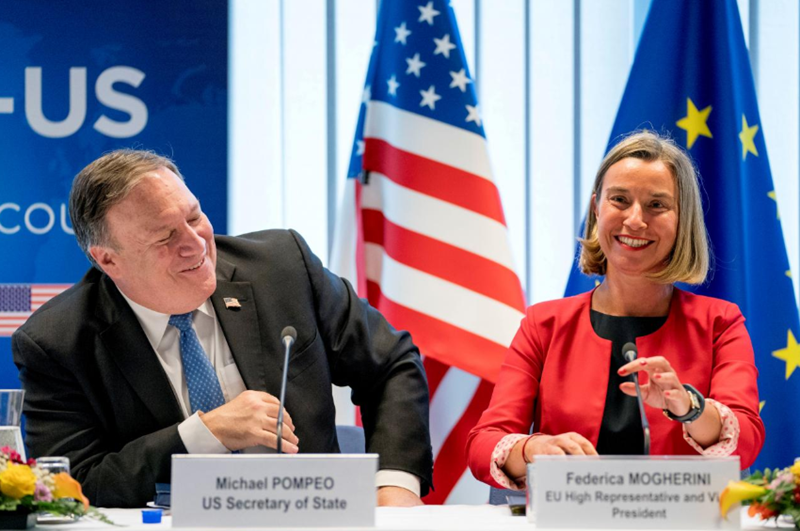 London, 19 Dec – Since 1989 and the ascension of Ali Khamenei to Supreme Leader, Iran has followed a foreign policy doctrine of ‘West minus the US’, causing many political standoffs throughout the years.

Now, the doctrine is being put to the test once again as reimposed US sanctions are pushing Europe to choose between the US and Iran.

Of course, it seems like a simple enough choice on the surface. Iran is a hostile country that constantly threatens the security of other Middle East states and, indeed, the West.

Over the past 30 years, Iran has had a fairly unstable relationship with Europe, mainly because of Iran’s involvement in terrorist attacks or assassinations on European soil, like the Mykonos restaurant killings in 1992, where its terrorists murdered three Iranian-Kurdish opposition leaders and their translator.

Shortly after a German court identified the Iranian leaders as having “inspired, supported, and supervised” the murders, all European Union (EU) members recalled their ambassadors from Iran.

Even though relations improved in the following period, during the rule of Iranian president Mohammad Khatami, they were strained by the Iranian Resistance’s exposure of Iran’s secret nuclear enrichment facilities. Then talks between the West and Iran over the nuclear issue collapsed in 2005.

But the major problem with the ‘West minus the US’ policy is that Iran cannot hope to have friendly relations with the West, while it is hostile to the most powerful country in the West.

That’s why for the period 2002-13, Europe followed American policies on Iran, even reinitiating talks on Iran’s nuclear programme under Obama, which ultimately led the Joint Comprehensive Plan of Action. However, Iran should not have been trusted. Shortly after the deal was signed Khamenei banned further talks with the US and it became clear that he was not seeking an improvement in US-Iran relations.

Now, the mutual hostility between Iran and the US has led to an impasse on various issues and it was only a matter of time before the nuclear deal fell apart. The US withdrew in May, reimposed sanctions, and now the onus is on Europe to do the same.

But Europe seems to want to take a different path and help Iran to circumvent US sanctions by protecting European banks and firms who continue to work with Iran; despite there being no actual proof that this will evade sanctions. In fact, European diplomats have recently told Reuters that these are symbolic gestures, so any decision by Iran to stay in the JCPOA would not be based on European measures, but political will.

Political analyst Shahir Shahid Saless wrote: “If true, the doctrine of the ‘West minus the US’ once again is proven to be largely impractical.”