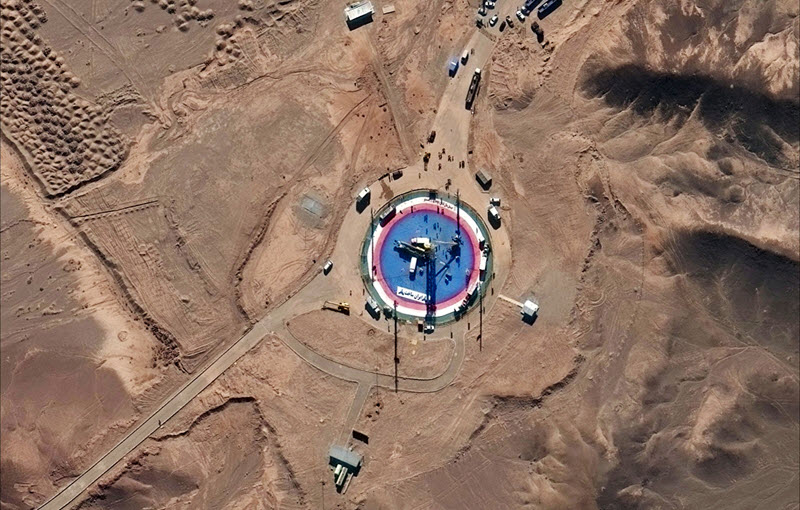 London, 7 Feb – In January, U.S. Secretary of State Mike Pompeo announced that Iran had conducted a satellite launch despite being urged not to by the United States. The rocket containing the Payam satellite did not succeed in its mission because, according to the country’s Telecommunications Minister Mohammad Javad Azari Jahromi, it did not gather enough speed.

Mike Pompeo said at the time that Iran is shamelessly disregarding the UN Security Resolution that bans it from participating in activities related to ballistic missiles that are capable of delivering a nuclear weapon.

Many experts and analysts agreed that the launch by Iran shows it is continuing to pursue enhanced missile capabilities that pose a threat to the Middle East and Europe.
Iran, of course, denied that it was breaching the UN Security Resolution.

It now appears that Iran has attempted to launch another satellite into space.

DigitalGlobe, a Colorado-based world leader in the provision of imagery, data and analysis, released images that show a rocket at the Imam Khomeini Space Center on Tuesday this week. Images from the following day show that the rocket was no longer in the same location. Even more telling, there were burn marks visible on the launch pad.

Iran has not yet commented on the suspected activity, but this is not unusual for this type of situation.

Iran has maintained that it is not on the path for a nuclear weapon and it claims that rocket testing and satellite launches have nothing to do with the country’s military program. Many experts and analysts, however, believe that this is not the case.

Regarding the claims that through this type of activity Iran is violating the United Nations Security Resolution, officials have pointed out that Iran is only “called upon”, not obliged, to refrain from carrying out such tests. This attitude is typical of the regime, showing that it has no disregard for such regulations.

Its behaviour following the signing of the Joint Comprehensive Plan of Action (JCPoA) has been the same, with many critics of the agreement pointing out that Iran has betrayed the spirit of the deal.

It is exactly this type of activity and attitude that should warn other countries away from dealings with Iran. Indeed the United States government can see that Iran is a major threat to peace and security and it has reversed the policies of appeasement that former President Barack Obama had in place.

However, Europe is not showing the same resolve and it appears to be following in the footsteps of Obama. EU officials are very reluctant to speak out about Iran, many because they do not want to jeopardise trade relations.

However, many are pointing out that trade relations should not be prioritised over the safety of one’s own people. The Iranian regime has been involved in plots to carry out terrorist attacks and assassinations on European soil.

Former FBI director Louis Freeh said it best when you don’t trust someone, you don’t do business with them.

AFP: As it trundles down busy roads, the minibus...