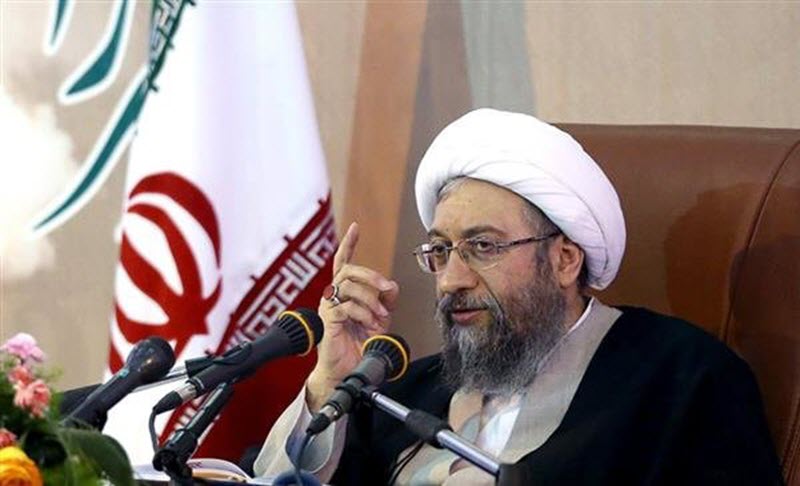 London, 7 Feb – Iranian judiciary chief Sadeq Larijani said that the Iranian regime will not accept the new European initiative for trade – INSTEX – because one of the requirements is that Iran must adopt the conventions of the Financial Action Task Force (FATF) and end its missile programme.

Larijani, who is also head of the regime’s Expediency Council, said: “These insulting conditions will never be accepted by the Islamic republic and we should not accept them. Our government officials should take into notice that we must not succumb to whatever they wish to only to gain a small stream of water.”

And he is far from the only Iranian official objecting to INSTEX, with comments from members of parliament and the Expediency Council showing great concern over the mechanism.

One Expediency Council member told the state-run Vatan-e Emruz daily that the Council was leaning towards rejecting FATF’s conventions, including the Palermo text, and that INSTEX would not influence their decision.

Saffar Herandi, an expediency Council member and advisor to Revolutionary Guards (IRGC) chief Mohammad Ali Jafari, said: “While there is no guarantee to resolve the country’s sanctions problems through adopting the FATF, on the other hand, not adopting these conventions will definitely pave the grounds for new problems. Today, we are forced to bypass the sanctions. If we do join these agreements, there will no longer be any way to bypass the sanctions.”

While Hossein Shariatmadari, editor-in-chief of Keyhan daily, a paper known to be the mouthpiece of Iranian regime Supreme Leader Ali Khamenei, also voiced concerns over INSTEX.

He wrote: “The most humiliating aspect of INSTEX is that in return for our oil income we are only permitted to purchase food and medicine. This is exactly the same oil-for-food plan that the U.S. and Europe imposed after defeating Saddam Hussein in his attack on Kuwait. As if we are a defeated and surrendered country, or an orphan or small child that the Europeans must look after us. Those minority members of the Expediency Council must now, without a doubt, vote no to the FATF.”

INSTEX is supposed to help facilitate trade between Europe and Iran in the wake of reimposed US sanctions, following the US withdrawal for the nuclear deal last May, but will reportedly only deal with non-sanctionable items, like food and medicine. It is likely that it will trade in Euros to evade US sanctions on Iran trading in dollars, but according to US officials, this will still violate the sanctions.

Details on how INSTEX will work and what it will do are still vague at the moment.

Is Iranian bomb research “mea culpa” needed for nuclear accord?

Reuters: U.N. watchdog findings that Iran may have worked...