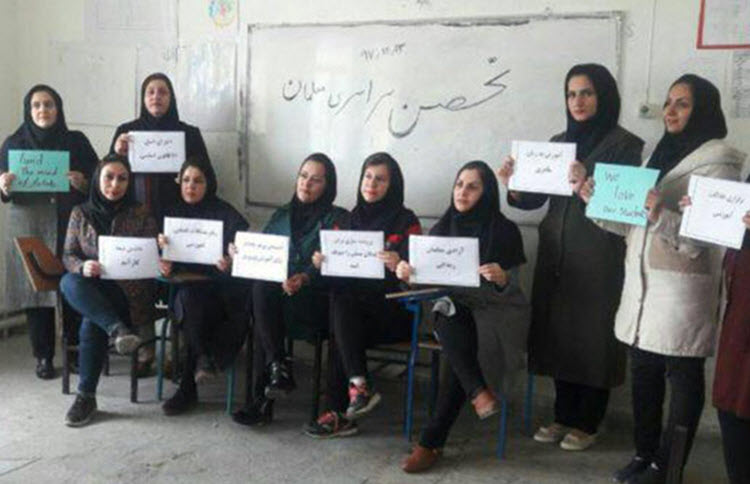 The nationwide teachers’ strike in Iran entered its third day on Tuesday, with teachers holding sit-ins in their principals’ offices to demand basic rights, like better pay, the right to form unions, and the freeing of all jailed teachers’ rights activists, as well as an adequate response to their demands from the government.

The Coordinating Council of Teachers Syndicates in Iran (CCTSI), who organised the three-day strike, reported that teachers at over 1,000 primary and secondary schools in 100 cities took part.

In some schools, particularly girls’ schools, pupils came out in support of their teachers, according to the Women’s Committee of the National Council of Resistance of Iran.

Maryam Rajavi, the president-elect of the NCRI, expressed her support for the demands of the teachers on Twitter and called on all Iranians to support teachers in their cause.

The group also praised security forces for changing their attitude towards striking teachers. At previous strikes, like those held in May, October, and November last year, security forces arrested many teachers.

Regarding the strikes, the Minister of Education said: “In the short term, we cannot solve the livelihood concerns. Some of my fellow colleagues are protesting and complaining about the situation. This method of protest, even in only one school in the country, is an anti-educational measure. The method of protest leaves a bad example for students for a teacher to sit in a school office and not attend the classroom, and in practice, we are actually behaving against justice.”

Instead of fixing the problem, the government is shifting the blame, which is par for the course for them.

The teachers are demanding better pay because their salaries do not match rising inflation and so the teachers are being pushed into worse living conditions since the economy began freefalling last year after decades of mismanagement. Currently, teachers’ pay is two-thirds to three-quarters lower than the national poverty line.

They also want more money put into the education budget for the next Persian year, which begins on March 21, in order to improve schools and offer free education for all.

Teachers also want for all legal hurdles relating to the establishment of independent trade unions removed, as this would be a better way to advocate for changes in the education system.

Another prominent teachers’ rights activist, Hashem Khastar, was recently abducted and taken to a psychiatric hospital for his defence of teachers’ rights. Khastar, who has been imprisoned several times for the same reason, wrote an open letter commending the teachers’ strike in October.

He said: “We don’t have guns. Our guns are our pens and our words and our gatherings and our sit-ins.”

The constant suppression of Iranian teachers has been repeatedly condemned by human rights organizations, workers’ syndicates, and trade unions around the world.

Reuters: Iran insisted on Sunday it would never stop...

AP: The leader of the top vote-getting coalition in...