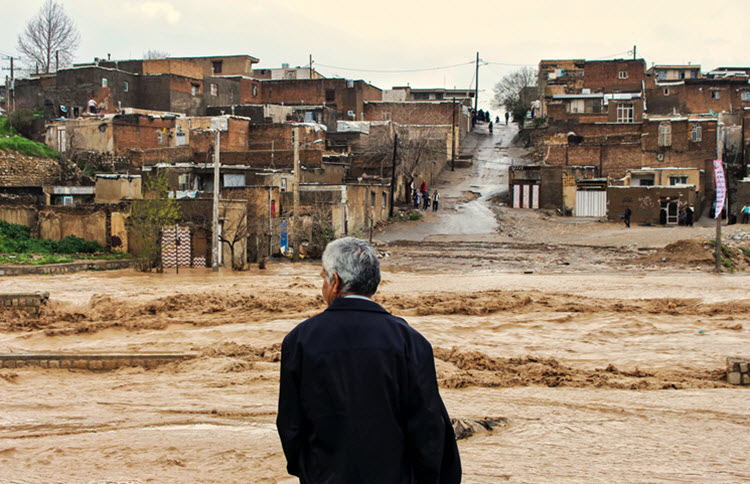 It may be months before we know the full extent of the current nationwide floods in Iran, if indeed the Regime doesn’t seek to cover it all up, but it is already clear that this is one of the biggest natural disasters Iran has suffered in 50 years.

The Islamic Red Crescent has already said that the floods have reached over 300 towns and cities in 22 provinces affecting 18.5 million people (almost a quarter of Iran’s population), with around 1.2 million people now homeless.

There has even been extensive damage to Iran’s infrastructure, with 500 landslides over 3,000 kilometres of roads and highways, limiting access to thousands of cities and villages, with 87 bridges, 160 dams and over 1,000 kilometres of railway lines destroyed. The damage done to farming is “incalculable”.

This disaster has exposed the weaknesses of the Iranian Regime, highlighting that the mullahs spend so much time, energy, and resources on preserving their ideological rule that it took over two days for the Regime to accept that floods had begun and give state-controlled media the green light to report on it. It took two more days before the state-run organisations even put in place a plan to help. All the while President Hassan Rouhani was enjoying a week’s holiday and Supreme Leader Ali Khamenei was at poetry gathering; both seemingly unavailable.

The Islamic Revolutionary Guard Corps (IRGC) intervened, but far from rescuing people or providing aid, they’ve been protecting their business investments at the expense of the Iranian people; some IRGC infrastructures actually contributed to the floods because they were built without concern for the environment. The IRGC chief Muhammad-Ali Aziz-Jaafari diverted attention from the Guards’ crimes by blaming the Rouhani cabinet for poor leadership surrounding the floods.

It was the ordinary citizens of Iran who have been mobilising to save people and, if possible homes and businesses, by diverting floodwaters, rescuing people using fishing boats, and distributing food. Meanwhile, the IRGC ferried in professional reciters of religious chants to tell the flood-stricken people that “Suffering makes us strong!”.

The Regime has also turned down international aid from governments and aid agencies, as is Khamenei’s wish and Rouhani doesn’t dare defy him, yet they still blame US sanctions for lack of aid.

Devastating Effects of the COVID-19 Pandemic on Iranian Society