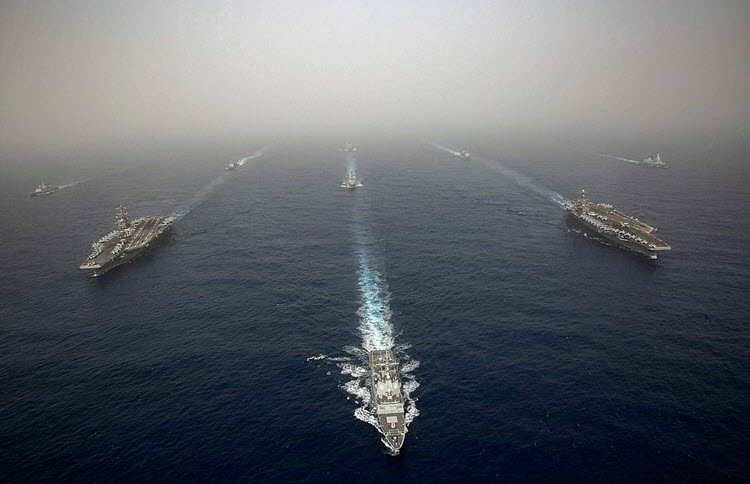 The US and its Arab allies are edging towards a confrontation with Iran in a contested waterway through which 20% of the world’s tradeable oil passes daily.

In synchronization with its Arab allies, notably Saudi Arabia, and with Israel, the US is intensifying pressure on Iran to wind back its support for what it terms “bad actors” in the region.

This includes Syria, Hezbollah in Lebanon, radical groups in the Palestinian territories, including Hamas, the Houthis in Yemen, and disaffected anti-regime elements in the Gulf.

While the US denies it is seeking to bring about regime change in Iran, this clearly is its hope.

White House officials on Tuesday told members of Congress that the recent actions by the U.S. has daunted attacks on American forces. Secretary of State Mike Pompeo and Acting Defense Secretary Patrick Shanahan stated their objective is to deter Iran and prevent further intensification. According to the Associated Press, Shanahan stated, “Our biggest focus at this point is to prevent Iranian miscalculation. We do not want the situation to escalate.“

Aside from an aircraft carrier strike group and B-52 bombers being moved to the region. A Patriot missile defense system has also been moved into the region in an undisclosed location. Non-essential personnel have been removed from neighboring Iraq, and U.S. allied countries with military training personnel have also scaled back those individuals in the region. The U.S. actions in the region have been the result of “credible threats” to U.S. forces and interests in the Middle East, according to Shanahan.

While no specified threats have been mentioned by the administration, Iran has been connected to the recent cyberattack by Hamas in Gaza against Israel and an escalation in the civil war in Yemen. Iran is also believed to be behind the sabotage of four oil tankers in United Arab Emirates directly across the gulf from Iran.

Bombings ascribed to ISIS in Iraq have also recently escalated as the U.S. Navy forces have entered the region. If a ground assault is waged, forces may mass in Iraq and Afghanistan, which border Iran on the west and east respectively. The U.S. also has air forces stationed in Turkey, located to the northwest of Iran. Iran is surrounded on all sides by U.S. allies, but with uncertainty over relations with Pakistan — also to the east of Iran.

However, Iran has a history of conducting naval exercises with Russia in the Caspian Sea located between the two countries to the north. The Caspian Sea is also considered a major shipping route for Iranian oil. With Russia’s naval power, there is concern they may become involved if there are military actions between Iran and the U.S.

U.S. historically strong relations with Israel have been further solidified by the administration’s decision to move the U.S. embassy to Jerusalem from Tel Aviv, thus recognizing Jerusalem as Israel’s official capital. The move was considered controversial by foreign policy experts since part of Jerusalem is considered to be ethnically Palestinian and in the West Bank. That also did not stop the administration from recognizing Golan Heights in the north of Israel to be officially part of Israel. Golan Heights was invaded and captured by Israel during the Six-Day War and two-thirds were effectively annexed in 1981 from Syria. This move by Trump put the U.S. at odds against the 28 members of the European Union.

Iran has also been a major force in supporting Islamic militants in Syria, coupled with the political and military influence of Hezbollah in Lebanon. Relations with Lebanon — a country located along the Mediterranean Sea to Israel’s north and west of Syria — remain tense, as the nation’s government is still composed partially of Iran-backed Hezbollah party members. In February, the country’s government was finally stabilized with Prime Minister Saad al-Hariri calling for elected officials to “turn the page and start working.”

BBC reports the country’s 30-member cabinet now has four women, which is a first for Lebanon. The major challenge for Lebanon is to revive the economy and cut national debut, which is at 150 percent of Gross Domestic Product. Limitation and ultimately rejection of the openly anti-Semitic Hezbollah faction is something the Trump administration and members of Congress such as 18th District Congressman Darin LaHood have repeatedly stated are essential to achieving peace in the Middle East. Continual work in Lebanon’s government to move toward less extreme views may result in better relations with other countries.

Forging better relations between the U.S., Lebanon and allies in the region may be made possible through individualized relationships. In April, Congressman LaHood met with a delegation of Lebanese representatives in Washington, D.C. Via his congressional Facebook account, LaHood — a member of the House Ways and Means Committee that overseas trade — noted he is proud of his Lebanese-American heritage. His great-grandparents emigrated to the U.S. through Ellis Island.

“I am grateful for the opportunity to represent our strong Lebanese-American community of over 8,000 families in the Peoria area,” LaHood stated.

“As co-chair of the U.S.-Lebanon Friendship Caucus, I appreciated the opportunity to meet with Lebanese Members of Parliament in Washington this week to discuss issues facing our two countries. A strong relationship between U.S. and Lebanon is essential to greater stability in the Middle East and I was pleased to see free and fair elections this past year in Lebanon. A peaceful formation of a government has shown Lebanon’s commitment to pursuing democracy in the region. As the Lebanese government continues to stabilize, I underscored the importance of rooting out corruption and thwarting the influence of Iran and Hezbollah within Lebanon. It’s critical that the U.S. continue to support an independent Lebanese Armed Forces (LAF). The strengthened bond between our two countries must remain if our goal is to achieve lasting stability in the region.“

Earlier this month, LaHood met LAF Commander Gen. Joseph Aoun in Washington, D.C. “I am grateful for his leadership of the LAF,” LaHood stated on Facebook. “As Iran and Hezbollah try to exert influence in the region, the United States remains supportive of a strong, stable, and independent LAF.”

Reuters: Iran will issue bonds worth $1 billion in...