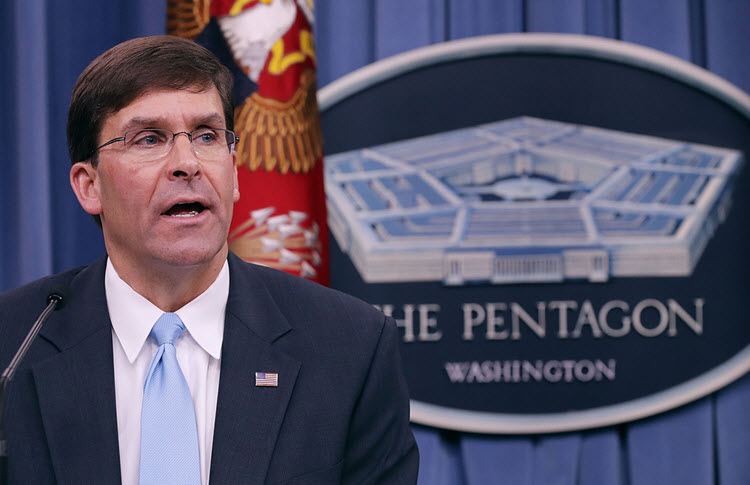 The US’s Acting Defense Secretary Mark Esper called on European allies on Thursday to publically condemn Iran’s actions and to join the US-proposed maritime security effort to protect the Strait of Hormuz, following several attacks in the key shipping lane that the US blames on Iran.

Esper said, during a news conference at the NATO Defense Ministerial in Brussels, that he’d asked allies to join a coalition to support freedom of navigation in the region through “broader maritime surveillance”, perhaps including “air surveillance”, “escorts”, or “a picket line of ships”.

Esper, who started his job on Monday, said that he would return to Brussels in mid-July to give a more detailed briefing on the “Iranian threat”. His comments come as Iran is expected to breach the agreed upon cap on its enriched uranium stockpile.

Secretary of State Mike Pompeo made a similar pitch to US allies in the Middle East this week, dubbing it the “Sentinel program” and proposing that it would include 20 countries. However, it is unclear whether any allies have yet committed to being part of the coalition.

Some top American officials have called on Asian nations to be part of this coalition as they receive the majority of oil from the Gulf. The coalition will likely be a big talking point at the G20 Summit in Japan this weekend.

At NATO, Esper said that the US doesn’t want to go to war with Iran and instead wants to bring Tehran back to the table for a new nuclear deal that addresses all of Iran’s malign behaviour, stating that the US strategy is “an economic and diplomatic one”, but “no one should mistake restraint for weakness”. He explained that the US was “by no means the instigator of recent tensions in the Strait of Hormuz”.

Iran vowed last week to violate the nuclear deal on Thursday by increasing its enriched uranium stockpile to a limit above that agreed by the 2015 nuclear deal. It is unclear whether Iran has yet done so, but an anonymous diplomat at the International Atomic Energy Agency said Iran was “more likely” to do so “at the weekend if they do it”.

Daily Beast: As more devilish details of the U.S.-brokered nuclear...