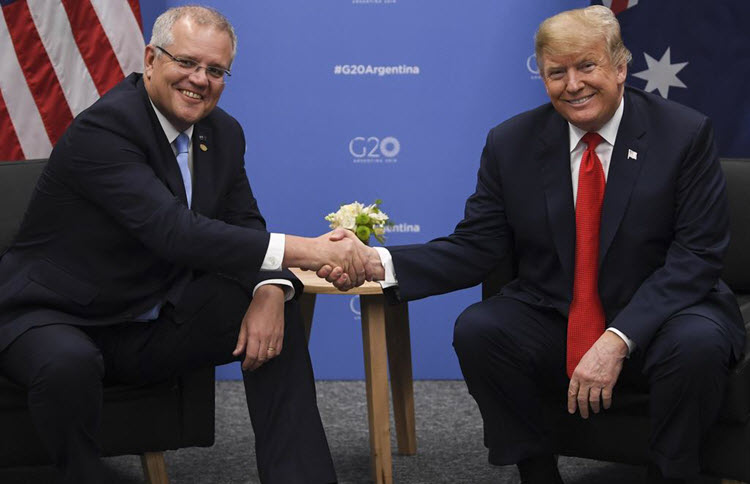 Australian Prime Minister Scott Morrison said that he would “seriously” consider any request from the US regarding military action in Iran “on its merits”, but stressed that no request has so far been made.

However, US Secretary of State Mike Pompeo has asked Australia to take part in a new “global coalition” against Iran to help protect key shipping lanes in the Gulf after several acts of aggression by Iran, including multiple tanker attacks and the downing of a US drone.

Pompeo said, before the G20 summit in Osaka, that the US would also appreciate it if Australia imposed additional economic sanctions on Iran.

He said: “I think Australia is an important player here. I think they carry a lot of weight in the sense that they, like many nations, suffer from the fact the world’s largest state sponsor of terror continues down the path of building its missile program in a way that threatens not only the Middle East but the entire world. Australia is an ¬important economic player so the imposition of more autonomous sanctions would be welcomed as well.”

This call came as tensions keep rising between Iran and the US, with the US almost launching a strike against Iran at the weekend. Things have been deteriorating since the US pulled out of the nuclear deal in May 2018, citing Iranian noncompliance, and now the US is continually leveraging new sanctions against Iran’s malign behaviour and Iran reacting violently by attacking ships or violating the nuclear deal.

However, Morrison was clear on Friday that he had not discussed the prospect of Australian involvement in military action when he met Donald Trump on Thursday night at the G20 Summit but stressed that he is watching developments closely.

Morrison said: “There are no requests and at this stage, I think those issues are a bit premature but we are obviously concerned. We will obviously work closely but any request like that will be dealt with in the normal way.”

Also on Friday, trade minister Simon Birmingham said that Australia has not yet decided to pursue additional economic sanctions against Iran, but that it is still under consideration. He said that Australia would look at whether the current sanctions were “fit for purpose” and would examine the “additional steps” taken by the US.

Britain, France and other European leaders are meanwhile calling on Iran not to violate the nuclear deal.

The Globe and Mail: Top U.S. officials have accused...

Time for action on Iran’s plans

Washington Times: Nearly two years have passed since the...