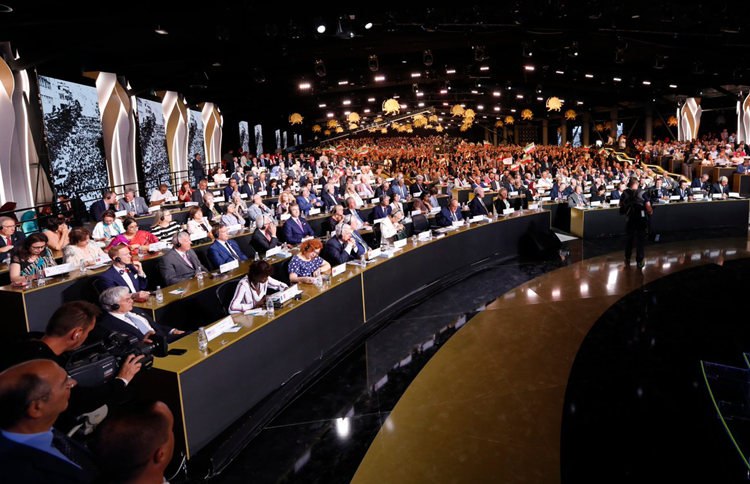 Every year, Iran’s main opposition group, the People’s Mojahedin (PMOI), otherwise known as the Mujahedin-e Khalq (MEK), and its parent coalition, the National Council of Resistance of Iran (NCRI), Iranians from all over the world and many distinguished guests from numerous countries gather to support the opposition movement and the people of Iran in the quest for a ‘Free Iran’. For the past few years, this major event has taken place in Paris, but this year it was held in Ashraf 3, the new home of the MEK, in Albania.

Iranian opposition leader Maryam Rajavi addressed thousands of people. She spoke about the progress the MEK has made in the past year, the challenges it has yet to overcome, and the ways in which the dreams of the people of Iran will come true.

The location of this year’s event is significant and Rajavi said that Ashraf 3 is a visual representation of how far the MEK has come. She said that not even two years ago, Ashraf 3 was not yet constructed. Now, after the great efforts of many, it stands tall and proud.

Rajavi said that the MEK is on a journey of which the final destination is Tehran where the people will live free from the ‘mullahs’ occupation’. They will rebuild the most beautiful country.

Maryam Rajavi, who is the NCRI’s President-elect, also pointed to the role of Massoud Rajavi who created and led a resistance movement that has such deep roots; a resistance that has stood, and still stands, firmly against the regime’s religious dictatorship. He established the National Council of Resistance of Iran (NCRI) several decades ago and it is stronger than ever.

Referring to the many ups and down that the MEK has been through, Rajavi said that the route has evolved over the decades. Camp Liberty experienced ten years of “blood-drenched perseverance” and four years of horrific bloodshed and tragedy at Camp Liberty.

Rajavi described the past four decades as an “all-out massacre”. There have been countless executions all over the country. There has been the 1988 massacre of political prisoners – a crime against humanity that the regime has still not been held to account for. The regime has destroyed the country’s economy. Production has been impeded. The environment has been destroyed and the Iranian civilisation has been ignored. Industrial capacity has declined by more than 70 percent. The banking sector is a mess. The value of the national currency has declined massively.

The Iranian regime’s rule is coming to an end, she said. Rajavi stressed that the ‘mullahs’ cannot overcome the current crisis. She said that it is at a dead-end. It is incapable of abandoning its terrorist activities and any leverage it had during the appeasement era has gone. If the regime changes its behaviour, it may as well give up its ambitions.

Because of this, she said that a new chapter is starting. But Rajavi made it very clear that the “roaring river of the martyrs’ blood” cannot be forgotten because it is why the MEK and the Resistance has progressed so much. The martyrs paved the way for those continuing to seek freedom and democracy, she said.

Rajavi has spoken extensively over the past few years about how regime change will happen. She has always maintained that it should come from within Iran. She recalled the words of Massoud Rajavi who said on the first anniversary of the Resistance that the nation must “ultimately free herself on her own”.

With regards to the current situation in Iran, Rajavi said that suppression is increasing, especially against the MEK. The regime is demonising the MEK because the MEK is the biggest threat to its survival. The MEK wants the regime’s clerical rule to be replaced.

The regime has been hoping that foreign leaders would continue to fail to take decisive action towards Iran. This has not been the case with the United States, but Tehran is trying to hold out until the next presidential elections with the hope that the next one will appease the regime like the Obama administration did.

The MEK has play an important role in exposing the regime’s crimes, its terrorism and its belligerent activities. Rajavi pointed out that the MEK warned the international community, during the negotiations for the nuclear deal, that it would be a mistake to circumvent the six UN Security Council resolutions. She said that the MEK also urged the international community to insist on a complete halt to the enrichment of uranium. The MEK wanted the nuclear deal to ensure that nuclear inspectors are given unhindered access to any suspected nuclear sites. Before the nuclear agreement was signed, Rajavi warned that the regime can “only understand the language of force and firmness”.

In order to move forward in the quest for freedom and democracy, Rajavi said that regime apologists must be stopped because it gives the regime a green light to continue with its belligerence. Regime apologists effectively let the Mojahedin be blacklisted. She said that any fight against the regime is a fight for peace. Removing the “source of war and turmoil” moves us closer to peace.

The regime’s lobbies and apologists say that overthrowing the regime would bring war. Rajavi points out that it is very clear to see that the regime is the source of war and crisis. Saying that appeasing the regime will help avoid war is what Rajavi describes as a “big ruse and deception”. She said: “Now, everyone can see that so long as this regime remains in place, war and crises will continue and intensify in the region. Therefore, anyone who seeks freedom for Iran, anyone who wants to save Iran from destruction and chaos, anyone who wants global and regional peace and stability, must rise up to demand the overthrow of the mullahs’ regime.”

Rajavi said that Albania is an example to follow because its government expelled Iran’s ambassador after terrorist plots on Albanian soil were discovered. Albania is showing the regime that its actions will not be tolerated and that there will be consequences. Rajavi said that appeasement must end and called on world leaders to make sure that the people of Iran and their human rights are not forgotten.

Tehran is responsible for the escalations of tensions in the region and it is trying to gain leverage. It has attempted to humiliate European countries by declaring that the Arak reactor will be reverted back to its previous condition. It has increased its enrichment of uranium to limits beyond what the nuclear deal allows for. It is fearful for its demise, so it is ramping up its activities. Its downfall in inevitable, though, and Rajavi said the regime is in its “final chapter”. The MEK is overcoming obstacles all the time.

Rajavi paid tribute to the Resistance Units that are spread all over the country. The MEK’s rebellion units have facilitated a “major breakthrough”. The Resistance Units have networks the whole way across Iran and Rajavi describes them as the “the answer to a regime that is incapable of reform and will not fall on its own weight”. Emphasising yet again that regime change must come from within, Rajavi said the regime “can and must be overthrown through the struggle of the Mojahedin, the units of rebellion and the people of Iran”.

The NCRI President-elect ended her speech on a note of optimism saying that the Resistance is marching “toward victory”. Iran will be taken back, she promised.