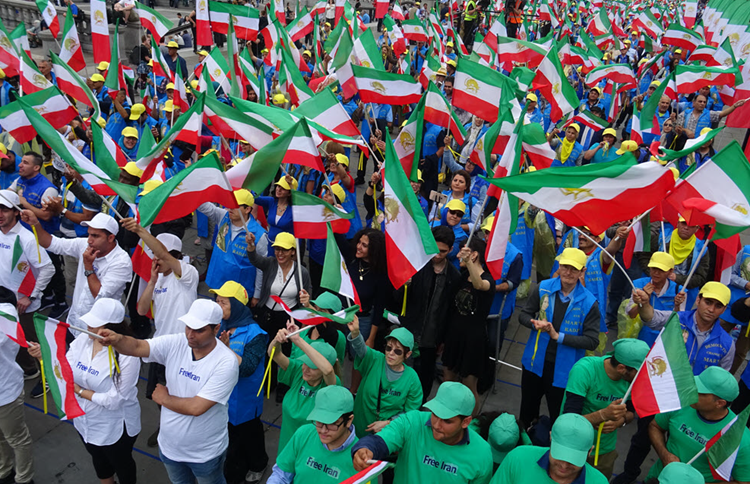 Over 3,000 Iranians marched in London on Saturday to call on the UK to place a number of Iranian entities on the terror watch list, as tensions rise between the two nations over tanker seizures.

The National Council of Resistance of Iran (NCRI) organised the protest to urge Britain to impose sanctions against the Iranian regime, as well as list the Iranian Revolutionary Guards Corps (IRGC), the Iranian Ministry of Intelligence (MOIS), and the Iranian supreme leader Ali Khamenei’s office as terrorist entities.

NCRI president-elect Maryam Rajavi told the demonstrators: “Your demonstration in London today is the culmination of a series of Free Iran protest rallies that ran from Brussels to Washington, Berlin to Stockholm in a month and a half. It is the continuation of the annual gathering of the Iranian Resistance held two weeks ago.”

Rajavi explained that Iran only understands a firm policy, said Britain and Europe must stop “paying ransom to the mullahs”, and urged them to follow through with the NCRI’s asks.

She also called on the British government to support human rights in Iran by sending an international investigative delegation to visit the prisons and meet with political prisoners.

Rajavi said: “Today our response should be firm, held on the principle that the Revolutionary Guards and the regime of Iran should be held to account for their atrocities.”

Conservative MP Matthew Offord backed Rajavi’s calls for the entities to be listed as terrorist groups, saying that it would help to “achieve a better Iran and a better world order”.

He advised that the decision to separate human rights and terrorism from the 2015 nuclear deal was a “mistake” by world powers, before calling on the UK to react firmly to the tanker incidents.

He said: “Our response must be firm and result in a firm, principled policy towards the regime that holds its leaders and IRGC to account for these atrocities.”

The US has already listed the IRGC as a terrorist group.

Labour MP Roger Godsiff said: “The UK should recognise the right of the people of Iran to change the … dictatorship and support the NCRI, its president-elect Madame Rajavi and her 10-point democratic platform for future Iran because it provides a clear road map for the Iranian people to establish a free and democratic Iran.”

the UK announced this week that all British-flagged vessels travelling through the Strait of Hormuz will be accompanied by British warships, following the seizure of the Stena Impero earlier this month.

This was believed to be in response to Britain seizing the Iranian oil tanker Grace 1 for violating EU sanctions on Syria.

The Hill: How to make sense of the different factions...