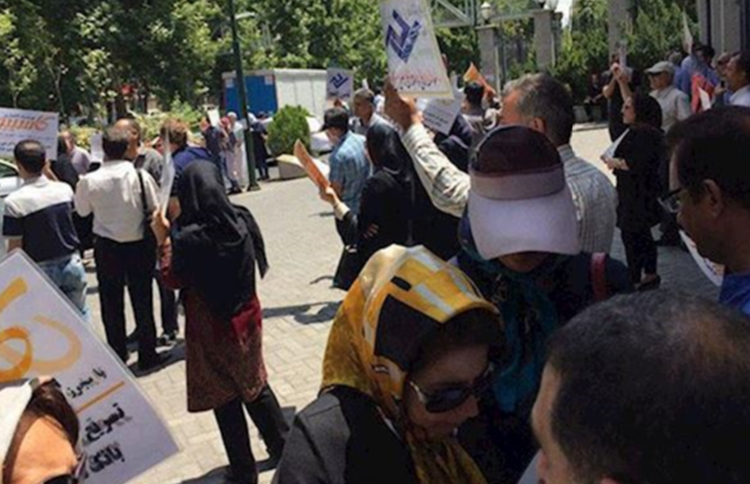 On Thursday morning, a group of plundered clients and shareholders of the Kimia Project gathered outside the office of the head of Iran’s judiciary in Tehran, protesting embezzlement by government agents running the project.

Kimia project is affiliated with the Iranian army ground forces, which is under the command of the Supreme Leader Ali Khamenei.

Iran’s capital continues to witness protests by Iranians of all walks of life over economic mismanagement and corruption by the authorities.

In the past week, teachers across Iran have been holding protests and calling for the authorities to ensure that their most basic rights are recognised and so that they receive the salaries that they are due.

Earlier this year, a large number of working and retired teachers took to the streets. They protested about the poor working conditions that they are subjected to and they highlighted the poor levels of pay that they have access to.

The teachers also called on the government to immediately release the imprisoned teachers that have been arrested and locked up by security officials.

In a recent teachers’ protests, many contract teachers gathered in front of the Ministry of Education building in Tehran on Sunday and Monday. They were heard chanting slogans about how they will not accept discrimination.

The contract teachers also referred to the lack of laws for contract teachers. Last month, educators gathered outside the National Organization of Employment Administration building to call on the government to implement an act that was adopted by Parliament three years previously. The act would allow the Ministry of Education to put teachers and educators that are on temporary contracts onto permanent ones.

The contract teachers have been chanting; “We do not want promises; we want the implementation of the law. I am not leaving here until I get paid.”