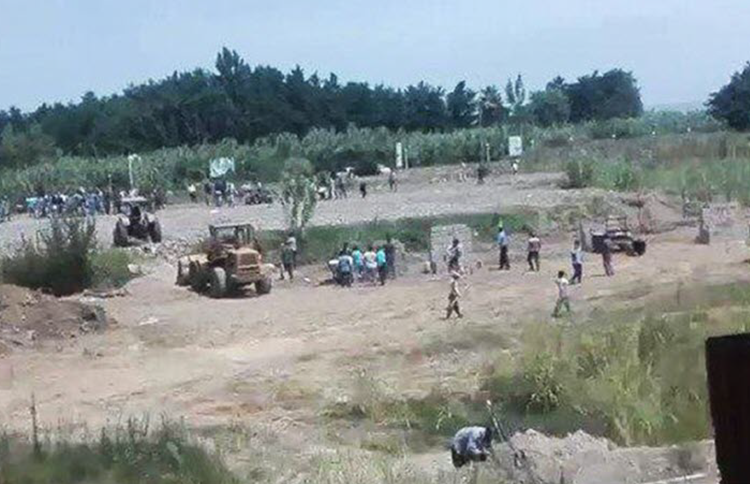 At least two people have been killed and four others injured after armed guards at an Iranian army air force base in Mazendran province in northern Iran opened fire on local people who were protesting the attempted confiscation of their lands.

The Fars news agency, which is affiliated with Iran’s Islamic Revolutionary Guards Corps (IRGC), reported that the clash began over land ownership in the Mahmoud Abad region, before describing the protesters as “hired” and “hoodlums”.

Fars wrote: “This attack took place when soldiers intended to install a fence around an airstrip inside the base. However, protesters began throwing stones, sticks, and chains at them. The armed guards responded by opening fire, resulting in two deaths and a number of others being wounded and some apprehended.”

One of the deputies for Mazandaran’s governor claimed this was not related to the confiscation of lands at all.

He told Fars: “There is tension in the region. The airbase security unit opened fire, leaving two people killed and four wounded. After this incident, the city council held a session followed by a similar meeting of the provincial council.”

While the state-run IRNA news agency reported that security forces at the base opened fire on protesters, as well as government employees who were trying to enforce the court decision over the ownership issue.

The IRNA said that a court in Mazandaran ruled that village lands occupied by the air force should be vacated so that the people can live there.

This is yet another example of the Iranian authorities’ attempts to crack down violently on protests in a desperate attempt to quell the growing anger by the Iranian people.

The Iranian people have taken part in a major, sustained, and widespread protest against the Iranian authorities since December 2017. Workers have gone on strike, students have hung protest banners, retirees have gathered outside government offices, but while their protests may seem disparate on the surface, they all share the common goal that the ‘clerical regime’ should be removed from power.

Iran’s theocratic government is terrified of being overthrown by the Iranian people and the organised opposition, which is why it is cracking down violently on the protesters and why the authorities go to such lengths to discredit their opponents on the international stage, often framing them for crimes the government has committed, according to Iran experts.

Renewed Call for Justice for Prisoners Killed by Iranian Authorities

AP: OPEC ministers are coming into a meeting deeply...