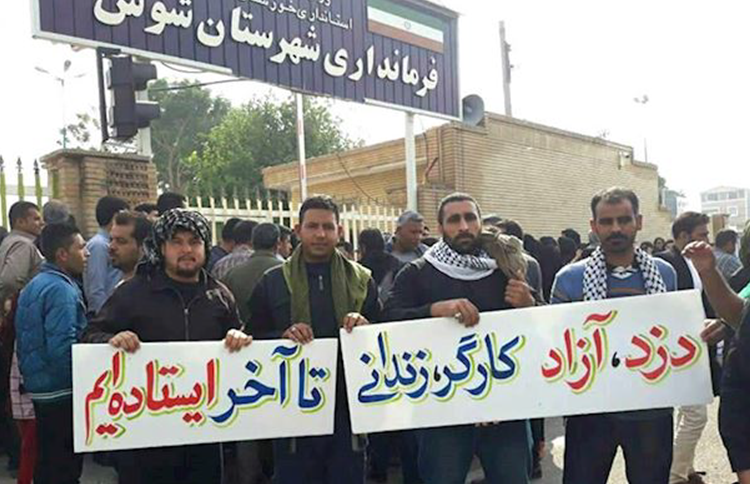 Fourteen workers from the Haft Tapeh Sugarcane Industrial complex in Khuzestan province, Iran, stood trial on Wednesday for attending a one-hour protest on May 9, where they demanded their most basic rights, according to the independent labour union of the complex.

In court, the fourteen responded to their charges by putting forth their demands again; payment of their two-months overdue wages, a solution to the labour contract problems, and the establishment of a plan for jobs classification.

Another seven of the complex’s workers had already been tried and sentenced to eight months’ suspended prison sentence and thirty lashes, according to the Haft Tapeh workers independent social media channel. The judge also told them to apologize to the complex’s owner.

However, the Iranian judiciary had previously made contradictorily reports about the Haft Tapeh owner, with some claiming that he’d been detained and others claiming he’d fled the country. While judicial authorities have failed to comment on the outcome of the recent trials.

The Haft Tapeh complex was very lucrative until the authorities sold it to a private buyer in 2015, with what is described as a murky transaction, for what appears to be just a $2 million down payment. It’s not obvious that any other payments have ever been made. The complex was soon drowning in debt (over $90 million in 2017) and to pay the debts, the owners withheld salaries, wages, and pensions, which triggered strikes, halted production, and the government started to import sugar in large amounts to meet the need.

The workers believe the debt can be easily written off because it is tax-related and owed to state-owned institutions, but privatization deals are often hidden in the government because the owners usually borrow from government banks or stop paying tax and other bills, pocket the money, and flee.

Another member of the council, Farhad Sheikhi, who was arrested by security forces for attending a demonstration celebrating the International Labour Day in May, was sentenced to four months and five lashes. This sentence will be suspended for two years because Sheikhi has no criminal record.

Numerous Haft Tapeh workers and their supporters, including labour activists and journalists, are either behind bars or waiting to stand trial.

US eyes Iranian warships in Mediterranean

New York Times: Just days before it is supposed...