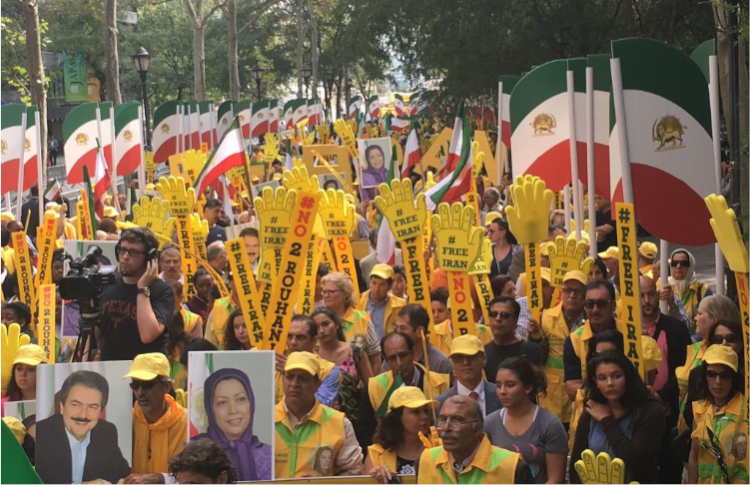 On Tuesday 24 September, thousands of Iranian Americans and supporters of the National Council of Resistance of Iran (NCRI) and Mujahedin-e Khalq (MEK) gathered outside the United Nations building in New York City. They were there to denounce the presence of Iranian President Hassan Rouhani at the UN General assembly and acted as the voice for the millions of Iranians in Iran who want regime change.

A number of prominent political figures spoke at the gathering that was hosted by the Organization of Iranian-American Communities (OIAC), including former US senators Bob Torricelli and Joe Lieberman and long-time supporter of the Resistance and former Mayor of New York Rudy Giuliani.

Mr. Giuliani said that he is very confident that the regime will soon be overthrown and said that the NCRI is more than capable of taking over and running Iran. He said that the leadership of Mrs. Maryam Rajavi – President-elect of the NCRI – can “transition Iran from a regime of terror to a regime of democracy and freedom”.

Senator Lieberman said that the Iranian regime cannot reform and it doesn’t matter what policies are in place because its aggression will always continue. He said that the only way to solve the crises in the Middle East is via regime change.

In a message to the people gathering in New York, Mrs Rajavi described their presence as a loud and clear “No!” to the presence of President Rouhani – a “representative of the religious fascism” and “a person that is proud to kiss the hands of the regime’s Supreme Leader and the IRGC”.

She also said that their presence there was a rejection of the appeasement policies that many nations have been pursuing with regards to Iran. Mrs. Rajavi said it is also a rejection of the inaction on the part of the international community. This inaction, she said, pushes the Iranian government even further towards suppression, warmongering and terrorism.

The leader of the opposition movement also said that the presence of these thousands of people at the United Nations is another move in the right direction towards regime change. These people are making it very clear that they, and the people of Iran, want the regime to be overthrown once and for all.

“You are the voice of protest and resistance by the Iranian people, a movement whose latest signs were evident in recent days through the brave workers at the HEPCO factory marching in the streets of Arak. And you are the voice of the Resistance Units and Councils of Resistance who through their courageous activities across Iran have kept the flames of uprising and protests alive.”

US Oil Sanctions on Iran Will Hit Hard