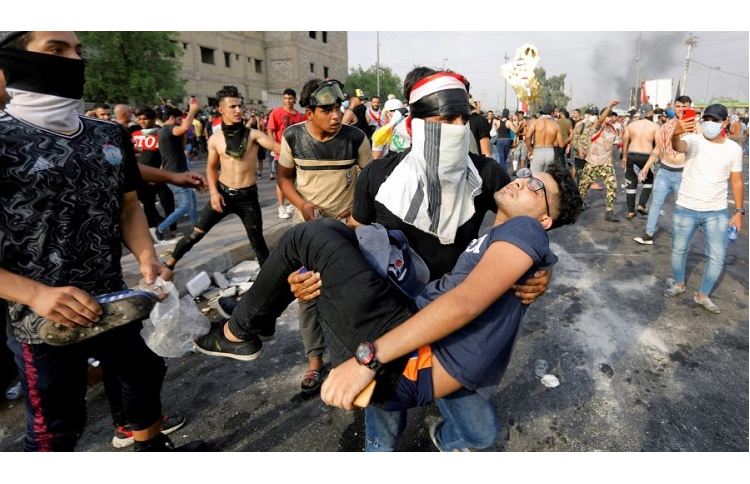 Nowadays, the rapidly expanding political and social events in Iraq have become one of the major news in the Middle East.

For many years, millions of deprived, oppressed, afflicted, war-ridden, and impoverished Iraqis have risen against their government. What the latest news and video reports show, despite the threats and repressions by the government and Iran’s mercenaries in Iraq, Iraqi people do not intend to return to their homes.

For Iran, Iraq is one of the most important elements of its foreign policy and expanding its hegemony over the Middle East on the one hand and a way of escaping from international sanctions on the other, analysts argue. Iran is trying everything to do not lose this strategic pole. The scope of the protests and uprisings of the Iraqi people shows a marked difference from the examples of years ago. This difference becomes clear when we pinpoint the main cause of this political and economic crisis in Iraq over the past five years.

The people who came on the streets point to Iran and label it as the cause of all their misery. Most of the forces which are targeting the people are the mercenaries of Iran. For Iran, such a critical situation would have critical results and would be a turning point for the geopolitical face of the area.

All the evidence proves that Iran’s Supreme Leader Ali Khamenei has sent the Revolutionary Guards (IRGC)Quds Force to Iraq to prevent such a change.

In parallel to this military action, politically but as is usual about the behavior of Iran, as in the past four decades, is trying through political propaganda, to show the Iraqi people as rebellion and hirelings of Western states. The propaganda method of Iran’s government is no different from the way it was used in the uprising of the Iranian people.

Khamenei attributed the protests in Iran to the US, Saudi Arabia and the domestic opposition People’s Mojahedin (Mujahedin Khalq or MEK) in explaining its cause. Today, Khamenei’s propaganda machine repeats exactly the same vulgarity of three decades ago, opposition activists say.

As an example, the state-run newspaper Kayhan wrote on 3 October that: “It is very clear that parallel to ‘Arbaeen’ (a special Shia ceremony), these riots [in Iraq] are aimed at disturbing the deep and friendly relations between Iraq and Syria, relations which truly frighten the Saudis, US, Britain, and France. Iraq is a great help in terms of Iran’s economic sanctions.”

And the same source continues:
“Attempting to close one of the country’s most important economic sanctuaries is not a little crime. Mr. Rouhani! What is happening in Iraq is a shameless attempt by these countries to close this ‘road’.”

While another state-run media, Aftab-e Yazd, on 3 October wrote: “Pro-US Iraqis are behind the recent demonstrations.”

Many reports of Iraqi people testify that the oppressive forces in Iraq speak Farsi, and in many cases, they don’t speak so as not to be recognized.

Iran Focus London, 21 Sep - The President-Elect of the...