Iran: The Fear Pyramid Has Been Reversed 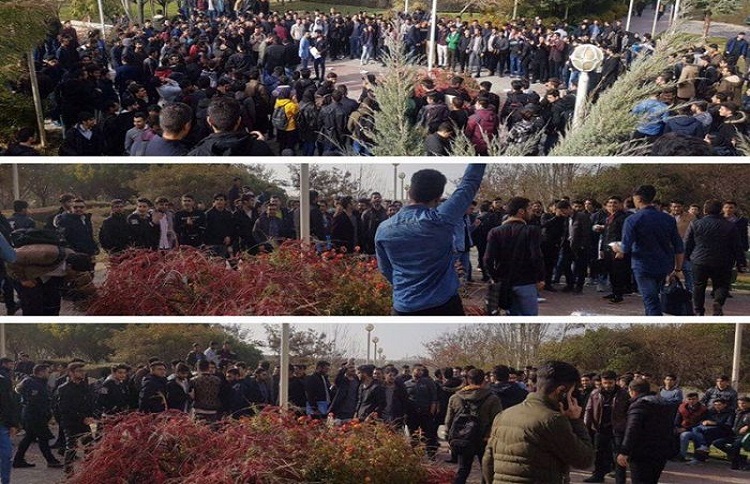 Iranian President Hassan Rouhani is avoiding the youth these days. This approach was also manifested on Iran’s National Student Day. Unlike previous years, Rouhani did not attend Tehran University on Student Day; instead, he later chose to lecture at Farhangian University to take part in this day.

What was the reason for the president’s reluctance to withdraw from the podium of Tehran University on the eve of the election?

One person of his faction answered this question:

“Why didn’t the president come to Tehran University? Because he knew that in fact none of the student factions were accompanied by him, and all advisors also said to Rouhani all classes of students, from independent students, leftists, and supporters of the reformist, to conservative students and the Resistance frontier in its entirety are opposed to Mr. Rouhani. Apart from the students, Mr. Rouhani knew that professors and university staff were also opposed to him.” (State-run Arman daily, Sadeq Ziba-Kalam, 9 December 2019)

Sadeq Ziba Kalam, who is from Rouhani’s faction, explicitly says that Rouhani was not present in the University of Tehran in fear of students while they’re now connected to the people on the protests.

Despite the clerical regime’s suppressive measures, including the stationing of intelligence, security and plainclothes agents around Tehran and Polytechnic universities, today a large number of students marked December 7, Student Day#Iran #IranProtest pic.twitter.com/FDZv9V8TpC

Escape from the fear of auditing

Resalat newspaper on 10 December mocked Rouhani’s move and wrote: “God forgive us; we suspected our dear President why they didn’t go to college on a Student Day; maybe he didn’t know what day 7 December (Iranian Student Day) is like he didn’t know about the gasoline (price hike)? We don’t know and we don’t judge!”

The regime’s president had to give a lecture at a university. After the uprising in November, he did not prefer to attend public places, so he deliberately chose the University of Farhangan for fear of students challenging him.

The state-run newspaper Vatan explains the reason for this choice: “Hassan Rouhani … by attending Farhangian University, selected this university, while this university is far away from student activities like other capital universities, for student day lectures.”

But Rouhani’s panic was so great that in addition to choosing the right place, he even prevented the media and television cameras from entering the area. As Kayhan, a newspaper affiliated with the Iranian supreme leader wrote:

“Rouhani was present at the Student Day ceremony while none of the news agencies were present at the ceremony, and there was no live television broadcast of the president’s speech, and only the coverage of the ceremony was with the Presidential news website.” (Kayhan, 10 December)

State-run newspaper Resalat wrote: “Rouhani is fleeing the challenge”… “The president’s behavior over the past few weeks and months shows that he is deeply concerned about facing serious criticism and, as a result, escapes critical confrontation and faces challenges.”

Fear of youth and students is not limited to Rouhani and his ridiculous behavior. Earlier, the Supreme Leader of the regime embarked on “clemency” and ordered the affability of the families of those killed in the uprising, those who he had earlier called ‘thugs’ and ordered their massacre. This reveals the regime’s fear of the people’s anger.

The walls of fear of dictatorship have collapsed in Iranian society. The fear pyramid has been reversed, and now the dictator is the one who fears the anger of the Iranian people.

By Pooya Stone Iran has been torn via numerous...