IRAN: Rouhani and a Failed Trip to Japan 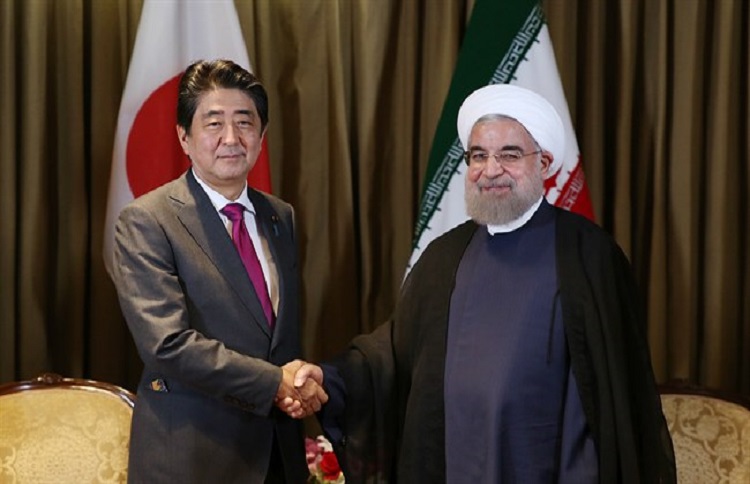 Iranian state media, especially those close to the Iranian President Hassan Rouhani, launched a wide propaganda campaign about the prospects for the regime before Rouhani’s trip this past week to Malaysia and Japan.

As the trip ended, the atmosphere of the media changed, and both analyses and news items show another shape of this event.

Prior to his return to Iran, Rouhani claimed a clear perspective on relations with Japan and the outcome of his talks with officials at a meeting with senior political, cultural and economic leaders in Japan: We met Prime Minister Shinzo Abe twelve times, and this is a sign that there is a will in the two governments, I think that there is no obstacle in the relations between the two countries except the US illegal sanctions. (State TV, 21 December)

Meanwhile, Reuters reported on Japan’s plans to join the anti-terrorism force in the region: “The planned Japanese operation is set to cover high seas in the Gulf of Oman, the northern Arabian Sea and the Gulf of Aden, but not the Strait of Hormuz.”

But Abbas Araghchi, the political deputy at the Ministry of Foreign Affairs of Iran, who claimed the day before that Rouhani’s trip was only for the development of bilateral relations between the two countries, on 21 December, implicitly acknowledged that negotiations had not yet achieved any outcome: “There were very heavy and intense negotiations last night, bilateral, regional, international, US sanctions and the JCPOA were discussed, and the two countries were expected to continue consultations closely,” he said.

Gholam-Ali Haddad-Adel, an advisor to Iran’s supreme leader Ali Khamenei, said, “Now the westernism movement is looking that at least Shinzo Abe does something if the French President Macron does not want to do anything. They want to put forward the slogan “Let us live”.

State-run Vatan Emrooz newspaper, 21 December, under the heading “Abe’s Melon” wrote: “Rouhani likes a probable deal. According to what the government and state-run media said, the outcome of the deal for Iran is an economic opening, which increases the government’s incentive to reach such an agreement.”

“However, what will happen in practice is that it will not make much difference to the sanctions and economy of the country and even to the exchanges with other countries. If, as some media or experts have speculated, as a result of a deal to transfer part of Iran’s blockaded oil money, this currency acts as temporary relief, that will worsen the situation after its consumption and its impact on the country’s economy. “

The Keyhan daily, affiliated to Iran’s Supreme Leader, also commented on the achievements of Rouhani’s trip to Japan, quoting Japan Times: “Japan Times notes in an analysis of our country’s president’s visit to Tokyo: Japanese experts say Tokyo has little diplomatic power to change the US relationship with Tehran – At the same time, they warned that Abe might not make significant progress in his next meeting with Rouhani.”

The Hamdeli newspaper also wrote about the Japanese warnings because of Iran’s missile policies and regional interference: “Rouhani is actually meeting with Shinzo Abe to convey this message to the Tehran authorities that these officials and, of course, decision-makers should revise their decisions and behaviors to reduce the JCPOA obligations and stick to their commitments in JCPOA, because if Tehran wants to be serious about reducing JCPOA’s obligations and even some of the regional behavior and missile programs, a trigger mechanism that will ensure a return of international and multilateral sanctions against Tehran will take effect.”

“Rouhani, in a meeting with senior executives in Japan before leaving the country, acknowledged that there was no obstacle in relations between the two countries today except for unlawful US sanctions.”

It is evident from the state-run media positions and Rouhani’s own words that the Iranian regime did not get any benefits from this trip.

Wife of Christian pastor held in Iran to testify before Congress

Fox News: The wife of the American pastor imprisoned...

AFP: Iran and the West remain at odds over...