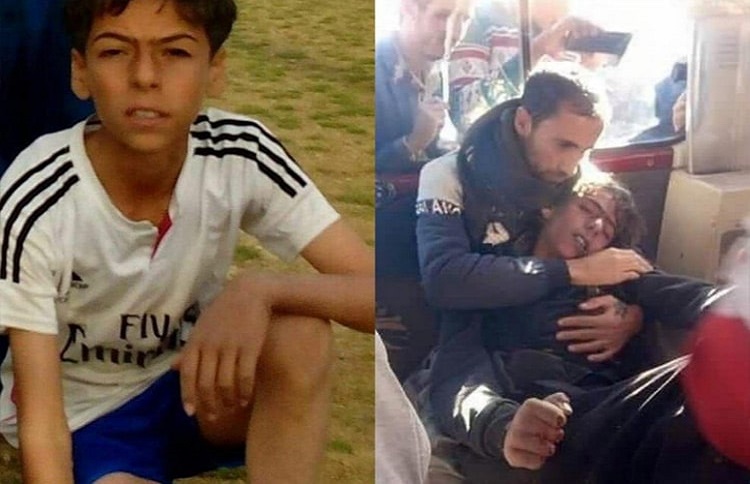 On Friday evening [December 20], the director of the Red Crescent Society of Kurdistan Province Mohammad Bagher Mohammadi announced that the body of a 14-year-old porter was discovered at Zhalaneh Mountain pass in Sarvabad county.

Notably, a few days ago, three porters had disappeared in the mountains. Pursuit and ambush by security forces, who have a notorious background in targeting unarmed porters, forced Farhad Khosravi, 14, and his brother Azad, 17, as well as another porter Hossein Karami, 35, to flee despite very bad weather conditions. On Wednesday, December 18, two of the porters were discovered.

Azad was found dead, and Hossein, who was still alive, was sent to the hospital. The death of Khosravi brothers, particularly 14-year-old Farhad, enraged the people of the region.

The outraged people of this area attended the funeral ceremony holding a piece of bread to show that he lost his life to merely make ends meet. Factually, despite all risks that threatened the lives of porters, wide poverty has left no options for the poor people in this region except transporting slight goods between Iran and Iraq’s Kurdistan to earn their living.

It is worth noting that hundreds of these deprived citizens are annually killed or injured by Iranian security forces. In this regard, hundreds of people showed their wrath against the oppressive apparatus by chanting, “Death to the dictator,” a reference to the supreme leader Ali Khamenei.

Farhad’s family and relatives in Ney county, where the funeral ceremony was held, emphasized on the Revolutionary Guards (IRGC)’s responsibility and chanted the slogan, “IRGC agents are responsible for this crime.” Notably, while nepotism and corruption have overwhelmed the ruling system at all levels, including the IRGC, poor people have to resort to this type of hard work to bring minimum goods for their families.

“Every day, a greater number of our graduated youths, even with high education digress like Ph.D., from the best universities of the country, have to hit the road and accept the dangerous by-ways in mountains and the risk of losing their lives to make ends meet for their families,” Iranian MP Ahsan Alavi said on November 10.

Dire economic conditions of border townspeople, in addition to systematic pressures imposed by the government on minorities, resulted in much more poverty and deprivation. For instance, in Kurdistan, the hard situation pushed even women to engage in tough and challenging works like porters.

“We see women and girls who have to appear as a man or boy [disguise themselves] to join the long row of porters… transporting goods as a porter is one of the toughest jobs that concluded by absolute poverty, inequality, unjust division of the country’s wealth and facilities,” Kurdistan’s Representative in the Supreme Council of Provinces Halaleh Amini said on October 11.

Regrettably, in accordance with the report of the Human Rights Organization ‘He Negav,’ during the past six months, at least 121 of porters and tradesmen were killed or injured in Kurdistan’s borders alone. This painful event is taking place while officials and their children enjoy—and brag about—luxury lives and fill social media networks with pictures of their lavish lifestyles.

They also misuse the national properties to educate in foreign universities to take the governmental seats whenever graduated youths are unemployment and work hard for basic needs. This clear discrimination, of course, drew firm reactions during the nationwide November protests.

And no need to say that ordinary people are waiting for any opportunity to demonstrate their anger against the ruling system, as they turned a funeral ceremony in Ney county into a political demonstration by chanting, “Death to the dictator.”

Ahmadinejad: World is isolated, not Iran