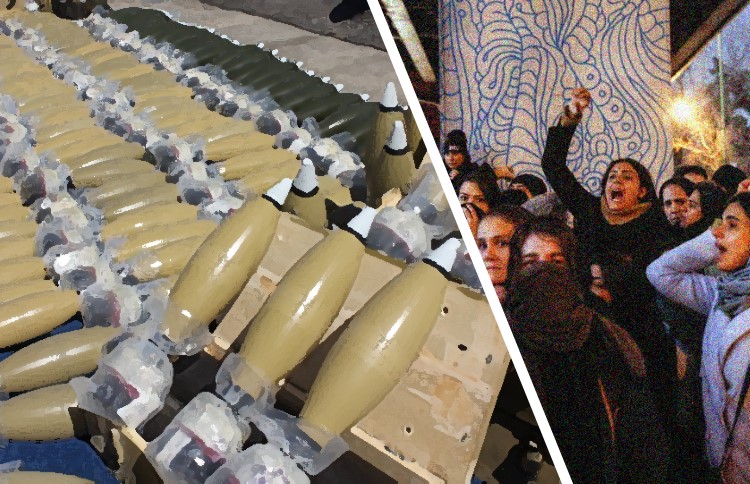 More information was revealed on Tuesday about the downing of Ukraine International Airlines Flight 752 when Iranian authorities confirmed the specific type of missiles that struck the flight.

Their latest statement on the topic was the first official confirmation of the fact that two separate missiles were involved, as previously alleged by Western intelligence agencies and news outlets that reviewed footage of the resulting crash. Now it is known that both projectiles, which struck the flight roughly 30 seconds apart, were Russian-made Tor M-1 missiles. The relevant air defense system was originally sold to the Iranian government by Russia in 2007.

The new revelation potentially opens up a new angle for discussion of the prospective sale of more advanced weapons systems to the Iranian regime in the months and years to come. Unless extended, a UN embargo on such sales is set to expire in October. Washington has warned that the failure to extend that deadline would threaten international security. But in December, Russia’s Deputy Foreign Minister Sergei Rybakov tentatively rejected the appeal for renewal, saying, “We’re not ready to do the bidding of our American colleagues.”

Russia has already developed a reputation for providing the Iranian regime with new weapons systems, although confirmed sales over the past several years have ostensibly been limited to systems that are defensive in nature. Prominent among these was the S-300 air defense missile system, which was originally ordered by Iran’s armed forces in 2010, only for the sale to be paused under pressure from Israel and Western nations, amidst tensions over Iran’s nuclear program. When negotiations between Iran and six world powers began to show promise of an agreement over that issue, Moscow quickly began to show an interest in completing the sale.

The moratorium was nearly lifted before the nuclear agreement was inked in July 2015, but sustained international pressure prevented Russia from moving forward for several more months. But the delivery of the S-300 finally began in April 2016, setting the stage for bilateral discussions about further security cooperation between Iran and Russia. The two nations have demonstrated increasingly close ties in a range of areas, and they have been widely cited alongside China as potential anchor points in an eastern bloc that might act in unison to oppose Western interests.

To the extent that Russian and Iranian leaders are personally interested in assuming that role, they are unlikely to be moved by American warnings regarding risk to international stability. But the Ukraine Airlines disaster could provide Western diplomats with a new plan of attack as they appeal to the Russians to extend existing arms embargos and generally reconsider their apparent commitment to selling Iran new weapons. That is to say, the mistaken shoot-down of the commercial liner highlights the possibility of incompetent, rather than malicious use of advanced systems.

Such concerns could prove even more persuasive in light of the fact that they are shared by a broad cross-section of the Iranian population. After the shoot-down was acknowledged by the Iranian government, protests erupted on university campuses and other locations spanning at least 21 Iranian cities. The unrest was naturally driven by the sheer loss of life, as all 176 people on board the flight were killed. But popular outrage was also fueled by the regime’s lack of transparency regarding the disaster.

It took more than three days for authorities to abandon initial statements that blamed the crash on technical faults. By all accounts, the eventual acknowledgment of responsibility was offered only begrudgingly, after intelligence disclosures and video footage of the incident contradicted the official story. What’s more, the regime’s resentment of this evidence was later underscored when it was announced that an Iranian citizen was arrested for allegedly distributing the footage that he captured showing one of the missile strikes.

The attempted cover-up prompted activists to direct their protests’ messaging squarely at the Islamic Revolutionary Guard Corps, which was reportedly operating the Tor M-1 missiles at the time of Flight 752’s departure from Tehran’s Khomeini International Airport. It is generally assumed that the IRGC was on high alert on the day of the shoot-down, January 8, because Iran had just launched a volley of ballistic missiles into eastern Iraq hours earlier, targeting American assets in an act of revenge against the January 3 killing of IRGC-Quds Force commander Qassem Soleimani.

Tehran has yet to explain why, if it feared the possibility of an attack from that direction, it did not take steps to ground local air traffic at the time of the missile strikes in Iraq. But some possible explanations serve to further underscore the potential danger of putting advanced weapons in the hands of the Iranian regime.

There is a widespread perception that the IRGC has little regard for the lives of Iranian civilians, to say nothing of citizens of other countries. Victims of the Flight 752 disaster included residents of at least six different countries, with 57 being citizens of Canada alone. But on Monday, the Iranian Foreign Ministry attempted to deflect foreign criticism by downplaying the international dimensions of the incident. “We have informed Canada that Tehran considers dual nationals who were killed in the plane crash as Iranian citizens,” said the Ministry’s spokesperson Abbas Araqchi, reaffirming the regime’s official non-recognition of dual citizenship.

Araqchi’s comments closely coincided with the regime’s decision to back away from a prior commitment to share data from the downed flight’s black box with other affected nations. Ironically, after refusing to send the black boxes themselves abroad for analysis, Iranian authorities acknowledged being unable to do so on their own and asked both France and the US to send the equipment necessary to do so. The requests have reportedly been denied so far, and Reuters reports that the sequence of events is sure to add to international frustration at a time when the Iranian regime is facing immense pressure to cooperate.

Meanwhile, there are signs that Iranian citizens are confronting similar frustration, as authorities pressure them to stand behind the Revolutionary Guards in spite of all that has recently transpired. Supreme Leader Ali Khamenei contributed to this trend last Friday in a rare address to attendees at the weekly state-sponsored prayer gathering in Tehran. In particular, Khamenei urged Iranians to avoid questioning the role of a hardline institution that he said “protects oppressed nations across the region” using a collection of “fighters without borders.”

More to the point, the supreme leader attempted to equate criticism of the IRGC with unwitting participation in schemes designed by the US and its allies. “Our enemies… were happy that they found an excuse to undermine the Guards, the armed forces, and our system,” he claimed.

But by the time of these remarks, participants in the latest anti-government protests had already called for the resignation of top officials, blamed the IRGC for the deaths of some of Iran’s best and brightest citizens, and torn down posters of Qassem Soleimani. Khamenei called specific attention to this latter phenomenon, as well, once again identifying it with the supposed activities of vaguely-defined Western infiltration networks. “Some tried to use [the plane crash] as an excuse to overshadow the martyrdom of our great commander,” he said, recalling attention to the public funeral that immediately preceded that incident.

Iranian state media and many international outlets, known for their biased reports in favor of the regime, reported that attendance at that ceremony exceeded one million people. But critics of the Iranian regime, including opposition activists organized within the National Council of Resistance of Iran (NCRI), explained that the funeral had been carefully stage-managed, with attendance being mandatory for many government employees and incentivized or facilitated for countless others by means of free bussing, school credit, and so on.

The largely feigned mourning for Soleimani stands in contrast to the evidently spontaneous protests that erupted soon after Tehran revealed its responsibility for the Flight 752 shoot-down and brief cover-up. Far beyond simply speaking out about the relationship between these two types of demonstrations at Friday prayers, Khamenei also oversaw the government’s brutal response to the activist gatherings, in which security forces fired tear gas and live ammunition into crowds of peaceful protesters. Such crackdowns are emblematic of the vulnerability that Iranian authorities feel, especially when public demonstrations so clearly contradict state propaganda.

The supreme leader is uniquely responsible for such crackdowns by virtue of his status as commander-in-chief of Iran’s armed forces. Furthermore, the IRGC, which is noted for an especially repressive response to popular unrest, answers to no authority other than Khamenei.

AFP: The Islamist Basij militia is to start patrolling...