The Invasion of Locusts in Iran and the Government’s Inaction 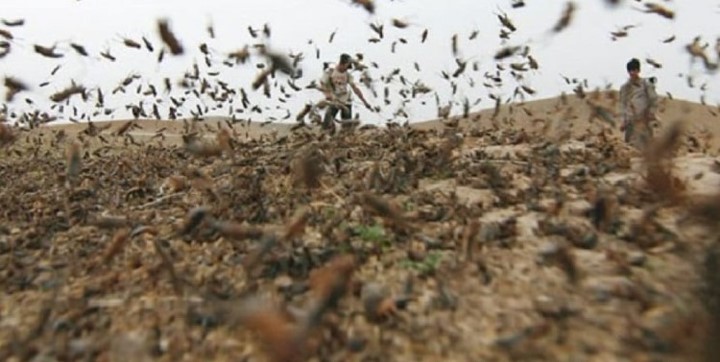 While locusts have invaded south Iran since mid-February, officials’ inactivity and incompetence have resulted in irreparable damage to residents of the southern provinces of the country. Notably, the United Nations’ Food and Agriculture Organization (FAO) had already predicted this disaster.

It is worth noting that like many other issues in the country, the Iranian government concealed the horrible invasion of locusts despite uncountable damages. In the best situation, government-linked media outlets covered the disaster in a limited scope. However, authorities were eventually compelled to admit the truth and reveal part of statistics after the Daily Star website reported on the situation.

Background of Locusts’ Invasion of Iran

During the past eight to ten days, locusts have been eliminating agricultural lands and gardens in nine counties of Bushehr province, southern Iran. In Bushehr province, only Deilam county has been spared so far. The density of locusts in the Hormozgan province was also high. The pest seems to originate in the southern neighbors of Iran.

“The influx of locusts has tripled in comparison to last year,” ILNA news agency quoted Mohammad Taghi Manuchehri, the head of Bushehr Bureau of Agricultural Jihad, as saying on February 27.

According to the FAO declaration, the pest of locusts won’t survive extreme cold and heat and only in mild climate has entered the southern areas of Iran. It will migrate to India, Pakistan, and Himalayan highlands in tandem with climate changes.

Desert locusts lay eggs only in areas that have wet soil. Heavy rainfalls enable them to lay as much as a thousand eggs in each square meter.

They divide into several flocks whenever their population has grown. Each flock start migration looking for more seeds and beans which consist of the main part of their food chain. In this regard, they settle in agricultural lands.

Countering Methods toward the Pest of Locusts

Using pesticides is the most common and primitive method for countering and annihilating this pest. Notably, this action should be conducted before the spawning of the flocks. Pesticide would be sprayed widely by helicopters, vehicles, or even with small hand sprays.

However, despite the huge damages in the past year and the passing of two weeks from the locust invasion in the south of the country, the government has taken no significant action so far. This disaster is taking place while international organizations like FAO have previously issued warnings to southern Asian states about the invasion of these vicious insects.

“This year, the organization of preserving plants needs credit an estimate 84 billion tomans to countering this pest in more than one million hectares of the country,” the state-run website Hamshahri Online quoted Seyyed Mohammadreza Mir, the organization’s spokesman, as saying on February 27. Remarkably, the government has only paid 20 billion tomans for this sector in accordance with reports published by the state-run media.

This incompetence and mismanagement have caused the expansion of the environmental catastrophe. In fact, the needy people, who struggle hard to make ends meet, bear the consequences of authorities’ inaction and negligence. In this context, given the scale of the disaster, the government has been crippled to curb locusts. “Now, we cannot control and rein in locusts by using the government capacity and facilities alone,” ISNA news agency reflected comments of Mohammad Hemmati, the chief of Bureau of Agricultural Jihad in Ghirokarzin, a county in Fars province.