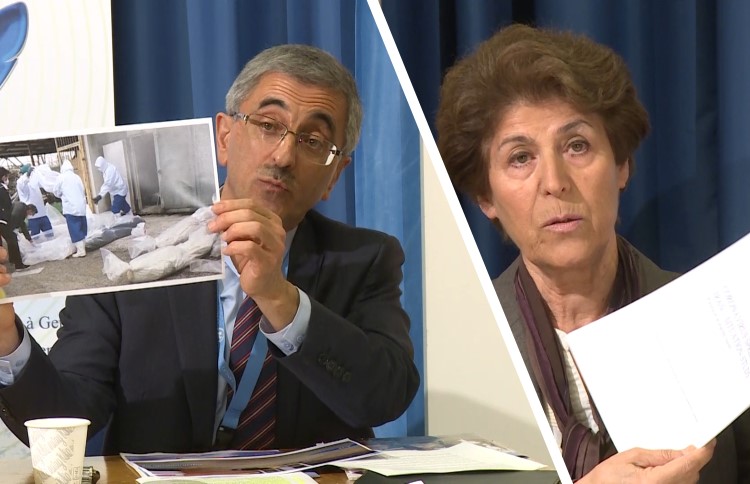 Iranian experts from all over the world held a briefing on the Coronavirus crisis in Iran at the United Nations’ Association of Accredited Correspondents (ACANU) on Thursday and presented a report that showed how the Iranian authorities’ cover-up created a catastrophe.

Behzad Naziri, from the National Council Of Resistance Of Iran (NCRI), said: “Our research and information based on reports from hospitals, medical centers, and physicians all over Iran, and from internal reports by Iranian authorities, as well as information in the public domain, indicate that the scope of the Coronavirus crisis in Iran is far bigger and far more pervasive than what the regime has acknowledged.”

This report, which was also sent to the World Health Organization (WHO), detailed:

Report contributor Parvaneh Tarverdian said: “We called on WHO to take necessary measures so that the efforts supervised and led by the body would, first of all, enlighten the world of the facts concealed by the regime and secondly, adopt measures so that the aid would be provided to public independent from the Iranian regime’s instruments. As such, hundreds of Iranian physicians and medically trained individuals are ready to cooperate in every way with the WHO’s efforts.”

The NCRI also compiled a report specifically about the threat of Coronavirus in Iranian prisons. Currently, the virus is spreading rapidly throughout prisons with little to no precautions being taken by the authorities.

Some prisoners have been allowed to leave if they were serving sentences of five years or less, but political prisoners are not allowed to do this because they are considered a national security threat. Therefore, political prisoners, including many protesters arrested during the recent uprisings, are in grave danger. Their relatives are even saying the authorities are using the Coronavirus to increase pressure or eliminate political prisoners.

Most prisoners are being denied sanitary masks and even disinfectants, even though the prisons were already suffering from a lack of hygiene, while in Karaj’s central prison some prisoners don’t even have prison cells and are being held in the yard.

Naziri said: “Due to the inhumane conditions of the prisons, prisoners, especially political prisoners must be released immediately without any bail or conditions, otherwise the Coronavirus outbreak will cause a human catastrophe in prisons.”

By Pooya StoneA member of the National Council of...

In Iran, future of university is in flux