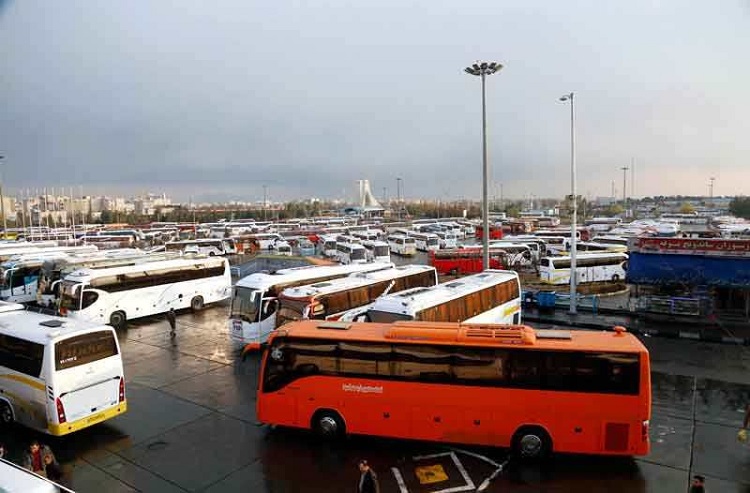 Despite the huge coronavirus outbreak in Iran, the government’s department for countering the COVID-19 refrains from banning commuters from traveling as a critical measure to reduce risks.

In this context, passenger terminals avoid stopping their business as their sole way of making ends meet as the number of people who intend to trip on the eve of the new year in Persian Calendar hasn’t decreased.

The state-run newspaper Shahrvand published a report about congestion in Tehran’s terminals and the lack of health measures in these places. Some parts of this piece follow:

“All throughout the coronavirus crisis, Behrouz, a bus-driver, has transferred passengers from Tehran to Rasht. He had many passengers despite the government’s announcement about closing northern roads. [Behrouz] transports passengers today, like every other day. He has bought his bus in installments and is concerned about the 25 million tomans he should pay. ‘No one said the road is closed. The road was open, and I carried passengers; however, there were few passengers,’ Behrouz said.’”

Delicatessens are busy like other days, and customers buy sausages. Sellers are wrapping sandwiches without gloves. They don’t usually use face masks. Drivers are also looking for passengers in queues formed in front of these delis. The question everyone to gain more passengers for their bus. Everyone is busy. The government does not state the closure of delis, and no one prevents daily workers from doing their business.

“’Please, wash your hands before sitting on chairs,’ a contractor has written on a banner installed on the wall. A customer said, ‘A few people may pay attention to these announcements; however, they still work because they cannot close the shop.’ The contractor has collectively eight shops and his rent is 140 million tomans per month. “Here, I got about 25 contractors. Last week we wrote a letter to the municipality to take action for us. We demanded them to issue the closure permit and cease with us over the rents. However, they didn’t respond to [our letter],” the contractor said.

On the other side, three workers are trying to clean dirty toilets that seem impossible to clean with any substance. “There is no remedy, we have to be here every day,” a worker said.

These days, the west terminal deals with a new issue. In addition to days, they are also busy at night. Many homeless people spend their nights at this place. “We heard that the government had freed many prisoners who committed unintentional crimes. Most of them are addicts and have no place to spend their nights. It is impossible to work here. [officials] should resolve this problem,” a deli seller Mojtaba said. It’s said that around 70,000 prisoners have been released for curbing the coronavirus infection in prisons. However, many of them have nothing to return to their hometown. Many don’t have money for a cup of tea, let alone purchasing the ticket and return to their families in other provinces. Also, they would not remain in jail if they had enough money to pay their debts.

Another shopkeeper, Mehdi, must pay 39 million tomans in rent to the municipality for his store. He also signed the joint letter for closing the terminal. However, he didn’t receive any response. Therefore, he had to continue his work in such conditions that many people attend terminal like the past, the health facilities are low, and there is no Health Ministry representative in one of the busiest areas of the city. The Mayor’s office claims that it disinfects the halls, stations, and toilets three times per day; however, no one verifies this claim.

Regardless of addressing the municipality by delis sellers for shutdown the terminal, the Road Maintenance and Transportation Organization supervises terminals, and this organization should close terminals. The municipality also claims that it is a service institute and is responsible for disinfecting terminals while they remain active.

“Given the problems of several people who should constantly travel, closing terminals is impossible. However, we cannot unilaterally decide to shut down terminals, and the department of countering coronavirus should order us. We will certainly close them once the department says it,” said Daryoush Baqer Javan, the director-general of passenger transferring organization said.

Everyone, of course, throws the ball into others’ courts, and the people’s lives and health are the worthless things in this respect. This report showed a part of many calamities that emerged due to mismanagement of the rulers; however, it didn’t justify systematic mismanagement and inability to resolve any problem of the society. In this respect, the Iranian government is the sole party responsible for both transferring the virus from China to Iran and spreading it by not imposing a quarantine on Qom as the epicenter. As a result, the people of Iran are falling victim to the horrible policies of the government once again. And unfortunately, the tragedy becomes exacerbated day after day by spiking the number of infected people and the death toll contrary to officials’ claims over containing the disease.