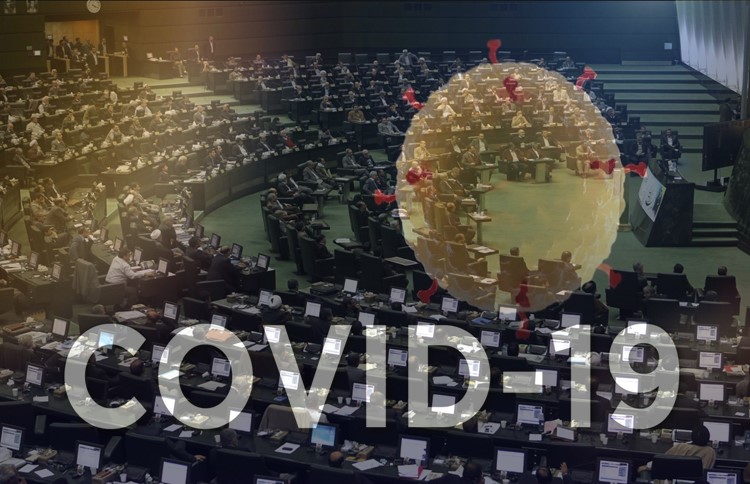 After 40 days of parliament’s closure in Iran, on Tuesday, 7 April, in the first meeting of the deputies, which was presided due to the parliament speaker Ali Larijani’s illness with the coronavirus, by the deputy speaker of the parliament, Massoud Pezeshkian.

A high priority plan for an outbreak of the coronavirus was submitted to the Presidium of the parliament, was on the agenda of the deputies. In this meeting, after the speeches of the proponents and the opponents, finally, this plan was considered contrary to the fourth principle of the constitution and the 110th principle, and by opposing it, it was removed from the agenda of the parliament.

By the first meeting of the deputies, it was discussed. The high priority plan included proposals to combat and control the coronavirus nationwide, including: “One-month closure of all offices and factories, schools and universities, elimination of gasoline quotas, intensification of traffic bans, free services to the people, free of charge of water, electricity and gas supply and the doubling of the livelihood aids for pensioners.” However, after examining by the regime’s parliament member, it was rejected and removed from the agenda of the parliament.

Representatives who spoke out against the plan argued that the time to address the issue is over and no longer relevant given the current situation. But the main point that has been made is that this plan is against the constitution and the authority of the regime’s supreme leader Ali Khamenei.

Two of the members, Ali Adiani and Ali Motahari, as opponents of the plan, gave a warning by the constitution, saying “the closure and restriction of citizens are contrary to Article 110 of the constitution and is within the authority of the leadership.”

Such alibis point to other goals and hands behind the curtains while using Khamenei’s authority they are trying to reject it. Otherwise, if these proposed subjects are withing the authority of Khamenei, he could interfere like last month while he approved the regime’s budget bill by a state order and ordered a one-month country’s shutdown. But as we have seen in Khamenei’s speeches these days, Khamenei himself, from the beginning and consciously, tried to cover up the dimensions of this tragedy and showing it a small and fleeting event.

Other members pointed to the economic dimension and the heavy cost to the regime, which is closer to reality because of the current capacity of the regime’s economy which is damaged by the regime’s wrong policies.

Mehrdad Lahouti, a member of parliament from Langarud, said: “We need 200-300 trillion tomans of resources so that we can manage the current atmosphere. Let’s not deceive ourselves. This year’s budget has a deficit of about 100 trillion tomans. And that’s while we were able to sell oil for $50 a barrel. But now we are not able to export that one million barrels of oil, nor would we able to sell it for $50.”

Bahram Parsai, a parliament member from Shiraz, called the statistics of the Ministry of Health about the people infected with this disease, as well as the statistics of 20,000 empty beds, “falsified” and said: “Please, let’s not make false statistics. The statistics of 20,000 hospital beds that are empty is a delusive statistic. I say this with evidence. The city of Shiraz, as the country’s medical hub, had more than 30 percent of its capacity for the admission of patients before the coronavirus. How is it now possible that we have so many empty beds? The hospital bed has special conditions. We can’t call every bed a hospital bed.”

Zahedi and Akbarian, another member of parliament, paid attention to the situation ahead, considering the people’s problems and the wave of dissatisfaction with the officials’ performance, and called for a solution to the events that are serious threats in the future.

State-run daily Shargh on 7 April wrote: The year 2020 will be a historic year for us. (In) the past year … the government-nation relationship has reached a critical stage. The events of November last year and January, the scope of the events in the city and the countryside, the chants that were chanted, and the art of the participation in the elections, along with the behavior of the United States and targeting the existence of the system, provided conditions that the exit of this situation required difficult decisions.”

AFP: Iran said on Sunday its nuclear standoff with...

AP: Azerbaijan has charged the editor of a Talysh...