Beirut Explosion Just the Tip of the Iceberg 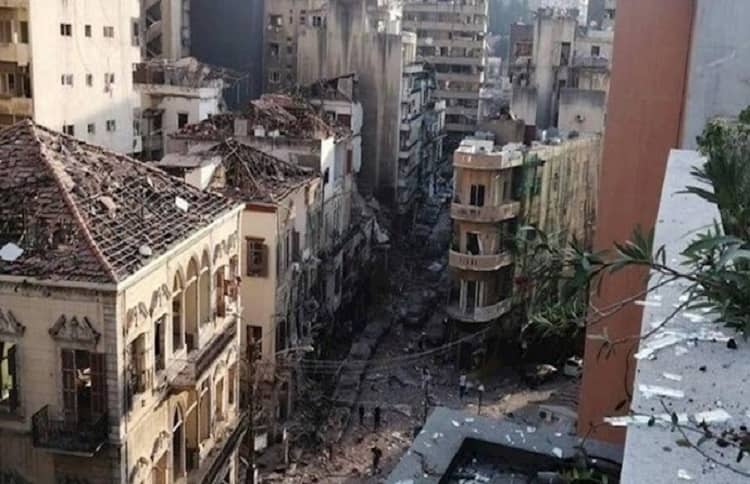 After the Beirut explosion, the anger and discontent of the Lebanese people flared up, the streets became the scene of demonstrations,

On 7 August, Subhi al-Tufayli, the first secretary-general of Hezbollah in Lebanon, released a video exposing Hezbollah’s crimes, led by Hassan Nasrallah, and said that Lebanon’s president, prime minister and parliament speaker should all be investigated in connection with the disaster, but that Nasrallah was the prime suspect, as he stands above the rest of the government. Iranian Supreme Leader Ali Khamenei, too, should stand trial, he said.

Criticizing Lebanon’s Judiciary, he added: “Is there any honorable judge in Lebanon? They are all being squashed under the shoes of those lowlifes [Hezbollah].”

Nasrallah, he said, was the effective ruler of the country.

A warehouse of 2,750 tons of ammonium nitrate and a very huge explosion drew all the attention to the perpetrators of the incident. The people of Beirut demanded an investigation into corruption by the government, as well as the non-payment of aid to Hezbollah and other corrupt people.

But the aftermath of the Beirut explosion is not the end of the story; rather, it was is a tangled story that at first seemed to have no solution. But the truth came out of the ruins of the event. The researchers calculated the intensity of the explosion and found that this terrible explosion was the only result of the explosion of 700-1000 tons of ammonium nitrate. And a strange and dangerous question arose behind this result. Where are the remaining 2,750 tons of ammonium nitrate of the Beirut port, while immediately after the explosion the government spoke about 2,750 tons of this material.

OCCRP reported that according to three European intelligence sources investigating the blast, it is likely the amount that devastated Beirut was only a portion of the initial 2,750 tonnes. They believe the size of the explosion was more likely the result of 700 to 1,000 tonnes of ammonium nitrate. This opens the possibility to believe that more than half the chemical shipment was missing.

If there were as little as 700 tonnes of ammonium nitrate on August 4th, the explosion of 2,750 tonnes could have caused more than triple the amount of destruction – virtually wiping Beirut off the map. And its damage would cover a large area and reach outside Beirut, and possibly some of the port cities of Cyprus, which are located opposite the coast of Lebanon.

Now the real question is where is the rest of the ammonium nitrate? Where has it been hidden in the past seven years? Some associate this issue with Hezbollah because nitrate storages have been discovered many times in Europe and in various countries and it has been determined that Hezbollah officials or members have attempted to store it.

For example, the destination of some of the missing nitrate may have been discovered by German police in a warehouse made by the Lebanese Hezbollah to making bombs.

Boxes of ammonium nitrate used to make bombs were the cause of a German police raid last month targeting groups suspected of links to Hezbollah based in Germany.

The weapons depots found by German intelligence in the buildings of a loading company in the south of the country were suspected to belonging to Hezbollah, which prompted the German Interior Minister to declare Hezbollah completely banned in Germany and designate it as a terrorist group.

Investigations into the Beirut bombing will reveal many hidden parts because what happened in Beirut, is only part of the storage and transport of ammonium nitrate by Hezbollah.

And at least “Die Welt” wrote: “The explosive tracebacks to Hezbollah: As far as we know, the explosion was triggered on August 4th when a stock of 2,750 tons of ammonium nitrate caught fire, which had been stored in a hall in the port of Beirut since the end of 2013 or beginning of 2014. Who exactly had it delivered and who was responsible for storage is currently being determined.

“But according to the secret service information that was made available to WELT, Hezbollah had considerable quantities of ammonium nitrate delivered to Lebanon at precisely that time. The Quds unit of the Iranian Revolutionary Guards is said to have been responsible for the transport, i.e. the part of those paramilitaries responsible for overseas operations, which also have a key political position in Iran.” (Die Welt, 19 August)