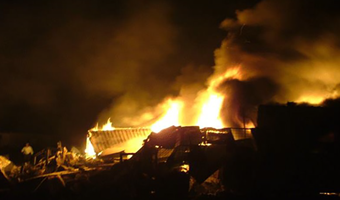 London, 31 Oct – A rocket attack on a camp of Iranian exiles in Iraq is a despicable and callous crime, Amnesty International said as it called for an immediate investigation, urgent protection and assistance for the camp’s residents.

Camp Liberty, in north-east Baghdad, was struck by a barrage of rockets last night, which killed at least 23 people, including one woman, and injured dozens. An Iraqi Shi’a militia, the al-Mukhtar Army, claimed responsibility for the attack and warned that the attack may be repeated.

The camp is home to around 2,250 unarmed Iranian exiles, mostly members and supporters of the Iranian opposition group, the People’s Mojahedin Organization of Iran (PMOI).

“This was a horrific act of violence against the residents of Camp Liberty, which cannot simply be ignored by the Iraqi authorities. They must ensure a prompt, independent and effective investigation into this attack and ensure that those responsible are brought to justice,” said Said Boumedouha, Deputy Director of Amnesty International’s Middle East and North Africa Programme.

“Their utter failure to investigate previous deadly attacks against the camp sends the message that its residents can be murdered with impunity.”

Eyewitnesses told Amnesty International that the attack started around 7.40pm local time as camp residents were gathering for dinner. Twenty people were killed instantly while another three later died from injuries in a Baghdad hospital.
Residents said around 80 rockets hit the camp, which they identified as Iranian built Falaq Katyusha rockets, though Iraqi media reported that between 12 and 38 rockets were fired.

The attack caused widespread destruction as it hit the camp’s electricity generators while hundreds of residents have been left homeless after at least 200 trailers were destroyed. The Iraqi government has yet to make a statement on the events, but other governments as well as the UN Refugee Agency – which considers Camp Liberty residents “people of concern” – have condemned the attack.

“The Iraqi authorities’ silence about the killing of 23 people is inexcusable. They are manifestly failing in their duty under international law to protect everyone in the camp, many of whom are asylum-seekers. On top of the loss of life, the destruction caused by the attack has left many residents facing desperate conditions,” said Said Boumedouha.

“The government must urgently ensure that electricity and water are restored, and that those whose homes have been destroyed are provided with adequate temporary shelter without delay.”

All the exiles living in Camp Liberty had lived in Camp Ashraf since the mid-1980s. After the 2003 US-led invasion of Iraq the camp and its residents were placed under US protection but this ended in mid-2009 following an agreement between the US authorities and the Iraqi government.

Barely a month later, on 28-29 July 2009, Iraqi security forces stormed into the camp; at least nine residents were killed and many more were injured. Thirty-six residents who were detained were allegedly tortured and beaten.

In 2011 the Iraqi government announced the closure of Camp Ashraf after relocating its residents to Camp Liberty in the north-east of Baghdad.

The government failed to investigate previous attacks on Camp Ashraf and Camp Liberty, and no one has ever been brought to account. In fact, senior Iraqi government officials have in the past made it clear that the camp residents were not welcomed in Iraq.

Ahmadinejad ally to head Iran’s centre for dialogue with West