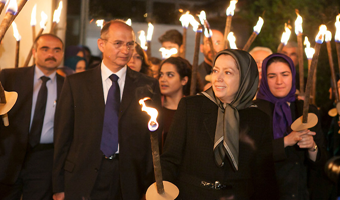 A memorial service was held in Paris this past Sunday following the deadly missile attack on Camp Liberty in Baghdad, where over 2,000 Iranian dissidents have been forced to live in exile. World leaders and Iranian dissidents were in attendance. All of the uncovered evidence so far points to the Iranian government having launched the attack.

23 people died as a result attack, which lasted for about an hour with at least 80 missiles striking the camp. Several of the missiles were found to be of Iranian origin. Besides those killed, many more were injured, some critically.

At the memorial, National Council of Resistance of Iran president elect Maryam Rajavi denounced the attack, arguing that “the attack on Camp Liberty was the byproduct of the regime’s desperation in the face of the Iranian nation’s burning desire for freedom”, adding “why is it that European governments are willing to roll out the red carpet for such criminals? Why do they reach out to those who the Iranian people want prosecuted?”

Key political figures from around the world were in attendance, including Vice President of the European Parliament, Dr. Alejo Vidal Quadras, and Ingrid Betancourt, a former Columbia Presidential nominee who was kidnapped by FARC and held for several years. Also present were Sid Ahmed Ghozali, a former Prime Minister of Algeria, and Peter Mathwes, a member of Parliament from Ireland.

So far, the attack has been drawing condemnation from numerous government leaders. U.S. Secretary of State John Kerry condemned the attack in a press release and urged world governments to speed up the resettlement process.
U.S. Sen. John McCain called the attack an “outrage” and stated that it “represents a betrayal of the civilians the United States committed to protect”. House minority leader Nancy Pelosi and numerous other politicians have also denounced the attack.

Secretary General Ban Ki-moon also condemned the attack, arguing that the perpetrators must be brought to justice.

Iran may hire others to finish Russian nuclear plant: report

AFP: Iran is considering alternative builders to finish its...

The Mirror - By Lord Corbett: Defiant to the...