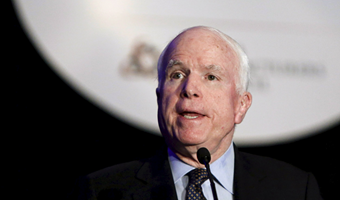 “As Iran’s malign involvement in Iraq grows, the security situation around Camp Liberty is increasingly dire. It is clear that immediate actions must be taken to ensure the safety and security of the residents of Camp Liberty,” writes Senator McCain. “Yet despite the atrocious conditions and continued danger to residents, the United States has remained ineffective, and even reluctant, in responding to our humanitarian obligations to protect the residents and facilitate their swift relocation to a secure location. Again, I urge you to continue to push for the protection of the residents of Camp Liberty and to expedite the refugee resettlement process. We made a commitment to protect these Iranian dissidents and, as we move forward, I look forward to working with you to fulfill this commitment.”

US-Iran naval contacts would be useful: US admiral

AFP: Contacts between the American and Iranian naval fleets...