The workers of Behshahr oil company protest in northern Iran 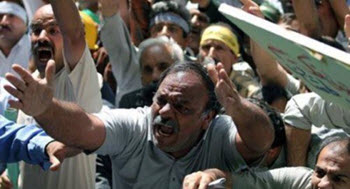 Tehran, 28 May – Former employees of Behshahr oil drilling company, situated in northern Iran, held a rally on Wednesday, May 25, in front of the building that houses the office of the regime’s local Governor. The gathering drew a crowd of 150 workers to protest against their dismissal and demanding an investigation into their situation.

One of the protestors said: “The dismissal of workers with 10 years of experience in deepwater drilling, to employ foreign workers instead, is incompatible with the slogan of this year.”

On the occasion of the Iranian new year celebration of Nowruz in March, Supreme Leader Ali Khamenei declared that the year ahead would be the “year of the resistance economy”, referring to the economic policies that had predominated during the period of US-led sanctions, when the Iranian government tried to develop domestic industries in order to diversify and sustain its oil economy.

Another worker summarized the suddenness and lack of communication in their firing: “The employers announced to 150 workers that starting 25 May they must not go to work anymore”.

He added: “The dismissed workers were in charge of performing the strategic operations and supporting the drilling platform of Amirkabir in the Caspian Sea. Nevertheless, on the basis of a tender, these tasks were entrusted to another company”.