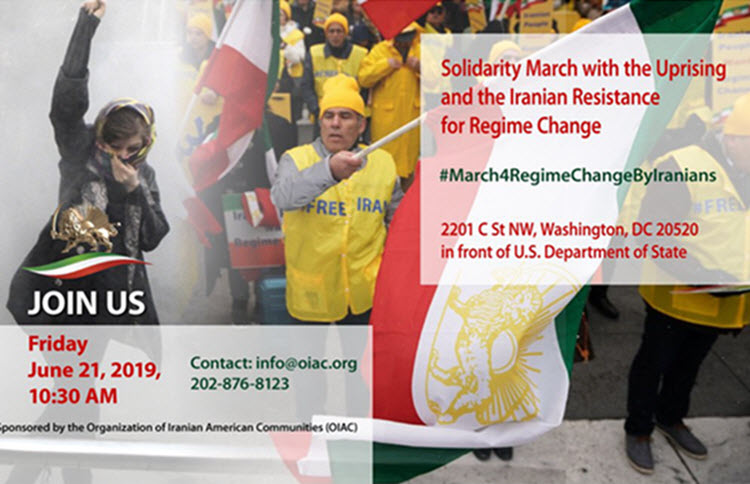 For 40 years, the Iranian regime brought nothing but oppression for the Iranian people, and terrorism and chaos for the Middle East. A quick glimpse at the long list of its crimes against humanity underlines the importance of supporting the great march of Iranian-Americans in Washington DC on June 21 in solidarity with the movement for a free Iran.

This rally is a call for regime change in Iran by the Iranian people and their organized resistance, the National Council of Resistance of Iran (NCRI) and the Mujahedeen-Khalq (MEK or PMOI), as the only solution to counter the dictatorial and warmongering regime ruling Iran.

A brief look at the Iranian regime’s history shows why it is a threat to the Iranian people and the international community.

1- During its four-decade rule, Iran’s regime has executed more than 120,000 dissidents, including the massacre of 30,000 political prisoners during the summer of 1988, most of them members and supporters of the MEK, also known as the People’s Mojahedin Organization of Iran (PMOI).

2- The regime has squandered billions of dollars of Iran’s national resources in nuclear and ballistic missile programs.

3- The regime engages in widespread oppression of youth and women. It deprives half of the society from their basic rights. The mullahs’ rule has been marked by the unprecedented expansion of drug addiction and other social problems among the youth.

4- Under the mullahs’ rule, poverty in Iran has expanded to unprecedented scale. According to regime officials, more that 80% of the Iranian population live under the poverty line.

5- This regime is notoriously renowned for its oppression of ethnic and religious minorities.

6- The Iranian regime ties its survival to the export of terrorism, warmongering and destabilizing peace and security in the Middle East and other countries in the world. The regime is in full support of Bashar al-Assad, the vicious dictator of Syria. It interferes in the affairs of Iraq and Afghanistan, gives shelter to Al-Qaeda operatives and supports them through its terrorist IRGC Quds Force, and backs terrorist proxy groups in different countries like the Houthis in Yemen and Hezbollah in Lebanon. The recent attack on the oil tankers in the Gulf of Oman is an example of the regime’s destructive role in the region.

The answer of the Iranian people to the crimes of this regime has been ongoing protests within the last decades. These protests have evolved into an organized movement in the past years. During the popular nationwide uprising that began in December 2017, more than 162 cities across Iran witnessed protests and strikes by truckers, workers, teachers, government retirees, students and employees of so many institutions inside Iran. These ongoing protests show the will of the Iranian people for regime change and their desire to establish freedom and justice inside Iran.

Regime authorities have admitted to the leading role of the MEK and its ‘resistance units’ inside Iran in organizing protests and strikes. The Supreme Leader has repeatedly, especially after the December 2017 uprising, referred to the role of the MEK. This shows the influence of the MEK in leading the uprisings to freedom.

The MEK is the central movement of the NCRI, the longest standing democratic coalition of Iranian opposition organizations. Maryam Rajavi is the NCRI’s president-elect for the transitional period after the downfall of the Iranian regime. Rajavi has a ten-point plan for the future of Iran, which is the best assurance to achieve freedom and democracy in Iran and peace and stability in the Middle East.

It is therefore important to support the march in Washington, D.C., on Friday to echo the voice of the Iranian people and their resistance by recognizing the Iranian opposition led by Mrs. Rajavi to establish freedom in Iran and peace and stability in the region.

AFP: EU leaders are ready to intensify their political...

Iran, Syria among top for G-8 and NATO

Associated Press: President Barack Obama and leaders of other...