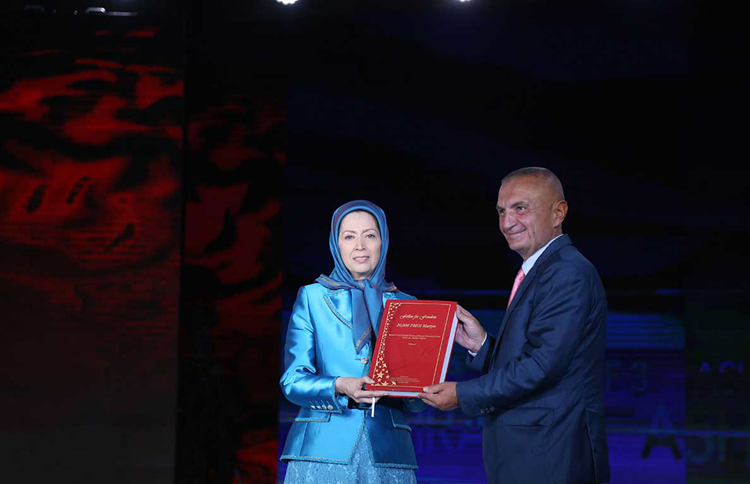 The President of the Republic of Albania paid a visit to Ashraf 3, the base of the Iranian opposition People’s Mojahedin Organisation of Iran’s (PMOI or MEK) on 13 September. President Ilir Meta was accompanied by his National Security Adviser as well as the former Minister of Defence and current Chairman of the Republican Party of Albania Fatmir Mediu.

Ashraf 3 is the name of the MEK’s residence in Albania. The small country chose to host around 3,000 members of the biggest political opposition group that is seeking freedom and democracy for the people of Iran.

During the visit to Ashraf 3, the President of Albania met with the President-elect of the National Council of Resistance of Iran (NCRI) Maryam Rajavi. The Albanian President was also able to visit the exhibition depicting the 120 years of struggle for freedom in Iran.

Speaking to members of the MEK, President Meta said that he was shocked by the reality many of the members of the opposition have faced over the years. He said: “I had no idea about the extent of your sacrifice and the genocide you and your supporters have endured. Having the possibility to see so many people, women and children, massacred was shocking.”

The Albanian President also said that he was aware of the Iran threat, saying that the widespread movement inside Iran has allowed the rest of the world to see just how tyrannical the “regime” really is. He recognized that the threat extends much further than the borders of Iran.

“This is really bad not only for the people of Iran but also for regional and global peace and stability.”

President Meta also mentioned Maryam Rajavi’s ten-point plan for a future Iran in which she outlines the way in which the country would move forward when the Iran regime falls. Future Iran will be based on gender equality, the separation of religion and state, the abolition of the death penalty, democracy, the rule of law and justice. It will also be committed to the Universal Declaration of Human Rights and it will be non-nuclear. With regards to foreign policy, Maryam Rajavi holds great importance to peaceful coexistence and to international and regional peace and cooperation.

President Meta said: “I was very impressed with the Ten-point Plan of Mrs. Rajavi because it is based on fundamental freedoms and will guarantee prosperity and democracy for the Iranian people. All of us here in Albania are united in our support for your efforts and determination.”

Maryam Rajavi thanked the Albanian President for the hospitality that has been offered to the Iranian Resistance, a gesture that she said will be recorded in history. Maryam Rajavi also thanked President Meta for the decisiveness of Albania with regards to its response when faced with Iran’s belligerence when it expelled the Iranian ambassador because of the links to terrorism.

The Iranian opposition leader also described Albania as a role model to other countries and reminded the President that the “religious dictatorship” is incapable of reform. Appeasement in the hope of reform, she said, does nothing more than encouraging terrorism and fundamentalism.

AP: President Bush's policy in Iraq "is not working,"...