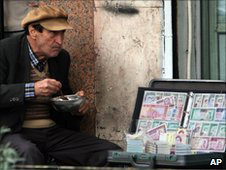 The rial lost about 20 percent of its value against the dollar before the central bank intervened last week to try to stem further losses by injecting hard currency into the market.

At a special parliamentary debate on the currency crisis, lawmakers passed a measure imposing legal penalties on touts who sell foreign currencies outside official exchange offices and banks where rates can be subjected to government controls.

The measure may scare away touts, a common sight in parts of Tehran where they wave wads of currency at passing motorists.

But it will have no immediate impact on the price most Iranians have to pay for dollars which, even at licensed exchange offices, sell at a 40 percent premium over the central bank’s “reference rate”.

Economists say the currency slide is due to fears about inflation, 20 percent and rising, eroding the rial’s buying power and to the effect of western sanctions making it harder for Iranians to get hold of foreign currencies.

Sanctions approved by U.S. President Barack Obama on New Year’s Eve added to demand for dollars, pushing the rial to an all-time low last week. The new measures would cut off any bank around the world from the U.S. banking system if they do business with Iran’s central bank.

The West has imposed increasingly tight economic sanctions on Tehran over its nuclear programme.

Tehran has denied that the currency problems are related to sanctions which the government says are ineffective and illegal.

He backed the government’s assertion that the major oil exporter still has plenty of foreign currency reserves, despite new sanctions aimed at curbing Iran’s ability to sell oil, and said the problems were a simple question of bad governance.

“We have to put the management of the central bank in the hands of a competent man,” he said, a swipe at Governor Mahmoud Bahmani, who was criticised for failing to attend the session.

Ahmadinejad is set for further criticism in parliament, a conservative-dominated body which has been increasingly hostile to him since a rift appeared between the president and Supreme Leader Ayatollah Ali Khamenei in April.

On Tuesday, lawmakers will summon a presidential representative to face questions on a wide range of perceived policy failings.

AP: Iran will never scrap its nuclear program, and...

IAEA says Iran needs to do more but hopes for deal

Reuters: The chief of the U.N. nuclear watchdog said...