Reuters: The Iranian property developer leant back in his chair, drew hard on a shisha pipe and looked down at photographs of a Tehran apartment block on his tablet computer. By Marcus George and Zahra Hosseinian 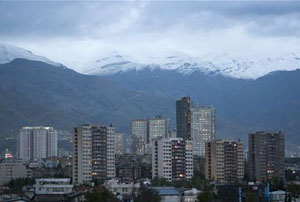 (Reuters) – The Iranian property developer leant back in his chair, drew hard on a shisha pipe and looked down at photographs of a Tehran apartment block on his tablet computer.

“I designed it myself,” he said proudly as he blew a cloud of scented smoke out into Dubai’s night air.

The pictures showed the lavish interiors of apartments and penthouse suites in a 20-floor development his company recently completed in Niavaran, one of the Iranian capital’s wealthiest areas, with views towards mountains to the north.

One of many towers to have sprung up on the Tehran skyline in recent years, it is part of a property boom due indirectly to sanctions imposed by the United States and its allies against the Islamic Republic over its nuclear activities.

While the sanctions threaten to bring the Iranian economy to its knees, million dollar apartments fitted out with the best imported equipment have become ever more common in Tehran.

Embargoes imposed on the oil and banking sectors since late 2011 have sent the Iranian rial currency crashing, pushing up import prices and contributing to spiraling overall inflation.

Wealthy Iranians, often unable to move money abroad due to the banking sanctions, have tried to protect their savings by turning to property at home, further stoking the market.

Developers have reaped the rewards but some now believe a bubble is forming and fear the consequences should it burst. For poorer Iranians, the boom is creating more immediate problems as it stretches their ability to provide for their families.

“Until around two years ago, the market rose steadily. Then it started going crazy,” the developer said on a visit to Dubai.

“You can’t believe how quickly everything’s gone up,” he said, asking not to be named.

The cost of apartments in his developments – among the most sought after in Tehran – have almost tripled in two years, he said. They now sell for about 200 million rials ($5,500) a square meter, and even his medium-sized apartments cost the local currency equivalent of $1 million.

Property inflation has spread across Tehran and is now being felt around the country, say investors, estate agents and prospective buyers.

“Prices have gone up drastically in recent months,” said Hooman Bina, a Tehran-based professional property investor. “There’s even been a hike since Persian New Year (on March 20).”

Iranian manufacturing is grinding to a near halt and unemployment is rising. In April the International Monetary Fund forecast the economy would shrink 1.3 percent this year. This has left investors with few opportunities beyond construction, and estate agents say it is a seller’s market.

“A lot of people have started buying places, especially small apartments, just to protect the value of their money. Real estate looks like a safe investment, at least for now,” said a Tehran-based analyst who – like many Iranians in the current sensitive political atmosphere – did not want his name to appear in international media.

Everything from the cost of land to equipment for new homes has soared. “The materials used in houses such as air conditioners, elevators, wood, iron and steel, especially in buildings in northern Tehran, are of very high quality and imported from abroad,” said Bina.

“Everything imported is much more expensive now,” he added. With the rial at 36,000 to the dollar in the open market, Iran’s currency is around a third of the value it had in mid-2011, making imported goods far more expensive.

To sell million dollar apartments in plush areas of northern Tehran, developers need to provide the best fittings on the market. Despite the sanctions, top quality European products such as Poggenpohl kitchens and Siemens white goods from Germany are available alongside even some American ones.

Those Iranians with access to hard currency are in the best position of all. Their dollars or dirhams go as far as they did in 2011, and in some cases farther, because the U.S. and Gulf currencies held their value while the rial plunged.

“I’d been meaning to upgrade my apartment and this is a great opportunity,” said an Iranian businessman looking out over Dubai from his 18th floor office. He settled in the United Arab Emirates 20 years ago but regularly visits Tehran on business.

As with every boom, many are missing out and struggling to afford a home as grocery and fuel prices also soar, however. After saving for 10 years, Mohammad Hossein’s hopes of buying a family home are further away than ever.

Worse still, the surge has also pushed up rents and the 38-year-old shoe factory worker has had to move with his wife and infant to a smaller apartment in Tehran because the family could not afford the landlord’s demand for an increase.

“Prices have gone up so much that people like us can only afford to buy or rent an apartment half the size of what they could afford with that same money two years ago,” Hossein said.

Iran has an unusual rental system, called rahn, in which a tenant “lends” the landlord a sizeable sum, sometimes with a modest monthly rent. The landlord uses the money as an interest-free loan – a valuable commodity when annual interest rates are around 20 percent – before returning it after an agreed period.

When 28-year-old graphics graduate Parastoo moved to Tehran earlier this year, she soon found out her budget could not keep up with the rents. Eventually she found a 51 square meter (550 square foot) apartment in central Tehran, paying rahn of 385 million rials ($11,000) in addition to a monthly rent of 2.5 million rials.

“It was a real struggle,” said Parastoo, who asked to be identified only by her given name. “The owner of my apartment originally wanted to sell it but because of the daily fluctuations in price he decided to rent and wait for prices to stabilize,” she said by phone from Tehran.

According to official figures, inflation is running at more than 30 percent but some analysts estimate the real rate could be double or even triple that.

“Iran has definitely entered an era of stagflation. It’s very vulnerable and its own economic policy has not helped.” said Steve Hanke, professor of applied economics at Johns Hopkins University in Baltimore, who estimates annual inflation at over 100 percent. “Without oil, everything would collapse overnight.”

For those in the business, the rapid property inflation has now become worrying. The national union of property advisers says that in the second half of the Persian year (up to March 20), prices went up more than the rate of inflation.

“The purchasing power of prospective buyers is going down with the increased rates,” said union head Mostafa Khosravi. “We want to see price stability because this leads to increased prosperity in the market,” Mehr news quoted him as saying.

Real estate agents say business has slowed in recent weeks and speculate this may be due to uncertainty before a presidential election in June to elect a successor to Mahmoud Ahmadinejad. The outcome is far from clear.

With fluctuations in the market and the ensuing difficulty of planning large-scale construction, the developer in Dubai said he had halted projects in Iran and was proceeding with caution.

“The country has stopped. Nothing’s moving but inflation’s still going up,” he said. “It’s a bubble and I don’t know what will happen.”

Bloomberg: Brent crude is set to recover from its...