New York Times: After driving for 15 minutes over the bottom of what was once Iran’s largest lake, a local environmental official stepped out of his truck, pushed his hands deep into his pockets and silently wandered into the great dry plain. 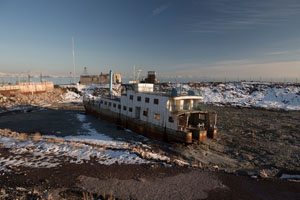 LAKE URMIA, Iran — After driving for 15 minutes over the bottom of what was once Iran’s largest lake, a local environmental official stepped out of his truck, pushed his hands deep into his pockets and silently wandered into the great dry plain, as if searching for water he knew he would never find.

Just an hour earlier, on a cold winter day here in western Iran, the official, Hamid Ranaghadr, had recalled how as recently as a decade ago, cruise ships filled with tourists plied the lake’s waters in search of flocks of migrating flamingos.

Now, the ships are rusting in the mud and the flamingos fly over the remains of the lake on their way to more hospitable locales. According to figures compiled by the local environmental office, only 5 percent of the water remains.

Iran is facing a water shortage potentially so serious that officials are making contingency plans for rationing in the greater Tehran area, home to 22 million, and other major cities around the country. President Hassan Rouhani has identified water as a national security issue, and in public speeches in areas struck hardest by the shortage he is promising to “bring the water back.”

Experts cite climate change, wasteful irrigation practices and the depletion of groundwater supplies as leading factors in the growing water shortage. In the case of Lake Urmia, they add the completion of a series of dams that choked off a major supply of fresh water flowing from the mountains that tower on either side of the lake.

“Only some years ago the water here was 30 feet deep,” Mr. Ranaghadr said, kicking up dust with each step on the dry lake bed. In the distance, spots of land — once islands where tourists would spend vacations in bungalows overlooking the blue waters — were surrounded by plains of brown mud and sand. “We just emptied it out,” he said with a sigh, stepping back into the car.

Iran’s water troubles extend far beyond Lake Urmia, which as a salt lake was never fit for drinking or agricultural use. Other lakes and major rivers have also been drying up, leading to disputes over water rights, demonstrations and even riots.

Major rivers near Isfahan, in central Iran, and Ahvaz, near the Persian Gulf, have gone dry, as has Hamoun Lake, in the Afghanistan border region. Dust from the dry riverbeds has added to already dangerously high air pollution levels in Iran, home to four of the 10 most polluted cities in the world, the United Nations says.

But nowhere is the crisis more pronounced than at Lake Urmia, once one of the largest salt lakes in the world — at 90 miles long and roughly 35 miles wide, it was slightly larger than Great Salt Lake in Utah. Environmentalists are warning that the dried salt could poison valuable agricultural lands surrounding the lake, and make life miserable for the three million people who live in its vicinity.

Along what used to be a lakeshore boulevard, worn-down snack bars and dressing rooms are testament to the days when people from across Iran would come to water-ski on the lake or cover themselves in its black mud, which is said to have healing powers.

About two decades ago, a local villager, Mokhtar Cheraghi, began to notice the water line receding. “First a hundred meters, then two hundred meters. After a while, we couldn’t see the shoreline anymore,” he said, standing in what was once his thriving cafe, Cheraghi’s Beach. “We kept waiting for the water to return, but it never did.”

Most people in the area blame the half-dozen major dams the government has built in the region for the lake’s disappearance. The dams have greatly reduced the flow of water in the 11 rivers that feed into the lake. As an arid country with numerous lofty mountain chains, Iran has a predilection for dams that extends to the reign of Shah Mohammed Reza Pahlavi.

Dam construction was given renewed emphasis under Mr. Rouhani’s predecessor as president, Mahmoud Ahmadinejad, who as an engineer had a weakness for grand projects. Another driving force is the Islamic Revolutionary Guards Corps, which through its engineering arm, Khatam al-Anbia Construction, builds many of the dams in Iran and surrounding countries.

Half an hour’s drive into the mountains above the city of Urmia stands the mighty Chahchai Dam, collecting water that would otherwise have reached the lake. The dam, finished during Mr. Ahmadinejad’s first term, now holds a huge lake itself, which local farmers use for irrigating their lands.

“Some of Urmia’s water is here,” said Mr. Ranaghadr, raising his voice over the howling winds that blow down from the surrounding snowcapped peaks. “The people here need water, too, is what they say.”

Besides producing badly needed electricity, the dams are intended to address the water shortage. But too often, the water is wasted through inefficient irrigation techniques, particularly spraying, Mr. Ranaghadr and other experts say.

In recent decades, the amount of land dedicated to agriculture in the region, the country’s heartland, has tripled, with many farmers growing particularly thirsty crops like grapes and sugar beets, Mr. Ranaghadr pointed out. His department has calculated that about 90 percent of all the water that should end up in the lake is sprayed on fields.

In a 2005 book that he wrote on national security challenges for Iran, Mr. Rouhani estimated that 92 percent of Iran’s water is used for agriculture, compared with 80 percent in the United States (90 percent in some Western states).

“They turn open the tap, flood the land, without understanding that in our climate most of the water evaporates that way,” said Ali Reza Seyed Ghoreishi, a member of the local water management council. “We need to educate the farmers.”

The lake has also been attacked from underground. As part of the government’s drive to promote local agriculture, large landholdings were divided into smaller plots, and most of the new owners promptly dug new wells, soaking up much of the groundwater.

“There are around 30,000 legally dug wells and an equal amount of illegal wells,” Mr. Seyed Ghoreishi said. “As the water is becoming less, they have to dig deeper and deeper.”

Climate change, particularly rising temperatures, has played a role. Average temperatures around Lake Urmia have risen by a little over 3 degrees in the past decade, official statistics show.

A long drought in the region seems to have ended two years ago, with rainfall levels returning to normal. But the increased rainfall has not made up for the other factors that are draining the lake.

“We are all to blame,” Mr. Ranaghadr said. “There are just too many people nowadays, and everybody needs to use the water and the electricity the dams generate.”

Back in his office, the Department of Environment, officials sounded like soldiers on a doomed mission. They had drawn up no fewer than 19 plans to save the lake, ranging from the sensible (educating farmers in new irrigation technologies) to the fanciful (seeding clouds to increase rainfall).

“We can start now,” said Abbas Hassanpour, the head of the office. Flanked by his assistants, including Mr. Ranaghadr, he said his department had created “task forces and models ready to implement.”

While Iran is shooting monkeys into space to advance its missile program, the Rouhani government, low on funds because of the impact of the international sanctions against Iran’s nuclear program, has not made any money available for efforts to restore the lake.

Even if it were, officials say, it is probably too late to save Lake Urmia. All the money in the world can be poured into the lake, one of the officials said, but in the most optimistic projections, it would take decades, if ever, for the water to reach its old levels. There are simply too many problems, too many competing interests, for the rescue to be feasible.

Not doing anything, or not enough, will still create many problems. In 2010 and 2011, violent protests over the lake erupted in Urmia, and security forces had to be flown in to restore order.

“We are not allowed to speak of the lake,” said Morteza Mirzaei, who lives in Urmia. “But they built their dams, and now everything is gone.” Others said ordinary people were also to blame, but “the government is the steward of the country,” said Mushin Rad, who sells printer equipment. “They are responsible.”

Mr. Ranaghadr, who grew up around the lake, said he spends free time battling poachers in the hills around it. “You know what the real problem is?” he said. “Everybody across the world is only thinking of money. We did, too, and now our lake is gone.”

Christian Post: The worldwide struggle for freedom and democracy faces...