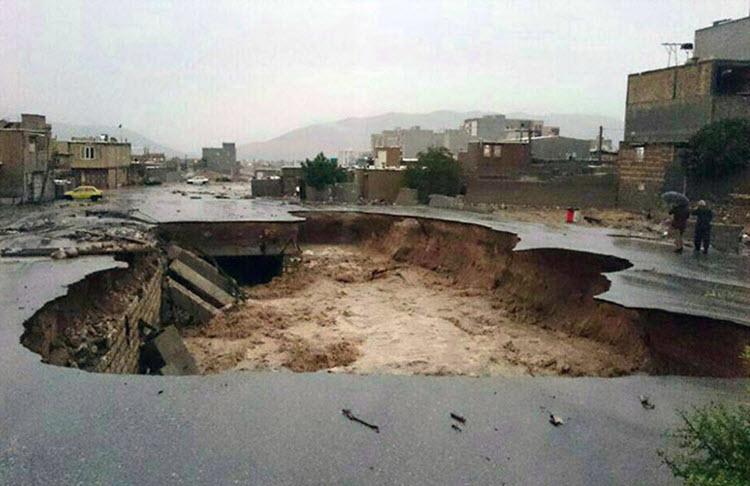 London, 16 Jun – Iran is plagued by widespread land subsidence thanks to the poor policies of the Iranian Regime, which have been described by one commentator as “anti-people and anti-national”.

Mahmoud Hakamian, who wrote a piece on the subject for the National Council of Resistance of Iran (NCRI), revealed that the subsidence is so severe that it has reduced many building’s earthquake resistance to only a level 4 quake on the Richter scale.

The Regime policies threaten to damage infrastructure (including bridges, roads, and railways), water and gas lines, electricity pylons, telephone poles, farmlands and wells (which would further the water shortage).

Hakamian predicts that the results could be so catastrophic that the capital city of Tehran and other large cities would have to be evacuated.

He wrote: “The deep crisis of land subsidence will particularly be a more prominent issue in Tehran when we note that Tehran lies on three major fault lines, while an increased land subsidence in the city over the past ten years has reduced its earthquake resistance from 6 to 5.4 in Richter scale.

Hakamian pointed out that the subsidence problem has mainly been caused by the excessive use of groundwater and aquifers in the raising of crops. Many farmers have resorted to using fresh water on their crops and leaving the sprinklers on 24/7 because of the huge subsidies on the water.

He also highlighted that the Regime is ignoring the use of 500,000 illegal wells across Iran, which also contribute to the problem. Iran is currently using 85% of its renewable water supply, but not giving them breaks to renew, leaving them at increased risk of drought in the future.

Another reason for subsidence is the ongoing excavations for the subway and parking lots for commercial buildings, which are constantly experiencing cave-ins as the soil in the ceiling of the tunnel is too dry to hold together.

Rouhani’s Deputy Minister of Roads and Urban Development acknowledged that these tunnels are having to be dug too deep to be safe.

He said: “All over the world, the maximum depth of a hole before it’s considered hazardous is 20-25 meters, meaning that holes deeper than that are considered dangerous. But right now we have holes in Tehran that are 70 meters deep.”

Hakamian wrote: “The threats raised by the scourge of land subsidence in Iran will even be multiplied when we know that due to non-deployment of world’s conventional approaches for retrofitting the cities as well as lack of the least safety measures in buildings, Iran’s big cities now own the world’s worst and most dangerous infrastructures against incidents and urban hazards, so much so that of the world’s 43 types of natural disasters, 32 are currently underway in Iran’s cities.”

Wall Street Journal: The Obama administration plans to use...