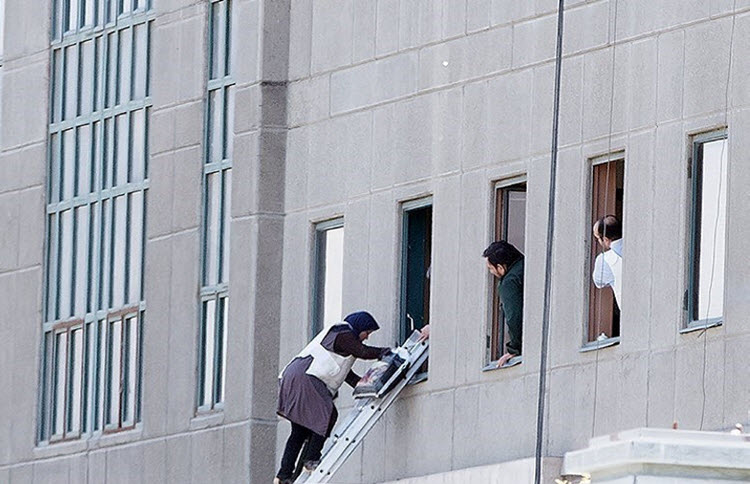 London, 16 Jun – Many people are speculating that the recent terror attacks in Iran, were in fact orchestrated by the Iranian Regime as a way of controlling the actions of their people, and not an attack by ISIS.

To the people of Iran, it does not seem likely that ISIS, who has never before attacked the Iranian Regime, would suddenly attack them out of nowhere. It is also odd that the terrorists were able to get to two of the most secure locations in Iran, the parliament building and the tomb of former supreme leader Khomeini.

One injured witness expressed doubt that armed people could enter the parliament.

He said: “We are not even allowed to bring a pen inside. They told us just take your paper and documents up. How in the legislative field of Baharestan, they came into Parliament with the gun. There was no police and safety and security equipment.”

Despite one of the June 7 attacks happening right outside the Regime’s parliament, the victims were mainly social activists and children, who were protesting the Regime’s policies. It has also been stated that some were shot at from the parliament.

Meanwhile, the members of parliament were kept safe inside a locked floor of the building, with many being unaware that a terrorist incident was happening right outside.

One Member of Parliament, Mahmoud Sadeghi, said: “When we were on the floor of the parliament, we even did not hear any voices.

Among the victims was Mahdieh Harati, a children’s’ rights activist, Hanieh Akbarian, a teacher protesting for employment rights, and Seyed Reza Sabeti, a famous soccer player, looking for his rights from Abadan.

The Regime has attempted to blame everyone else for the attack, from their political opposition, the People’s Mojahedin Organization of Iran (PMOI), to the US, to Saudi Arabia. Oddly, they don’t seem too concerned with ISIS, who claimed responsibility.

Of those who would benefit from this attack, the PMOI, the US and Saudi Arabia are pretty low on the list. The Iranian Revolutionary Guards (IRGC), the Regime’s private terror squad, will gain insurance payouts. The parliament could institute further crackdowns on civil rights in the name of terror prevention. While the Regime as a whole gets to rinse the blood of its victims off its hands by pretending that it couldn’t possibly be a terrorist supporter if they got attacked by terrorists.

The Regime has failed, however, to even keep the story consistent. Depending on which official you speak to, the attackers were either Iranian or foreign, there were between three and five of them, and the Regime may or may not now be claiming that they are protecting their country by destabilising the Middle East with constant wars.

The PMOI have rejected allegations of their involvement.

They release a statement which read: “IRGC and [the Intelligence Ministry] have a long history of creating such a scenarios and incidents using the hands of their puppet terrorist groups and then accusing their opponents.”

Donald Trump stated that whilst he prayed for the victims of the attacks, he ultimately blamed the Iranian Regime.

He said: “We underscore that states that sponsor terrorism risk falling victim to the evil they promote.”

Maryam Rajavi, the president of the NCRI condemned the attacks and pointed out how they benefit the Regime.

She agreed with Trump, that the Regime had caused this attack through its sponsorship of terrorism. She requested that the international community end its policy of appeasement of the Iranian regime, recognise the Iranian resistance for its commitment to justice and eradicate terrorism in the region by blacklisting the IRGC.

Editor of daily has ear cut off in Iran

Wall Street Journal: The Obama administration is dispatching its...