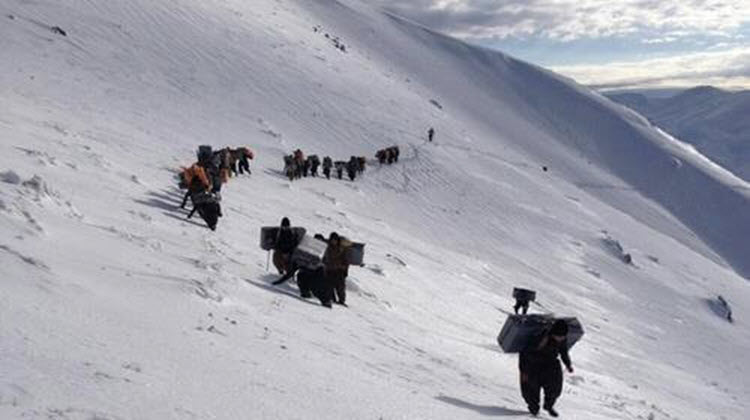 London, 31 Oct – A member of the Iranian Regime’s parliament has addressed that there is a major crisis facing porters (kolbars) in Iran that is resulting in the deaths of many.

Rassoul Khezri told a state-run news agency on October 28 that there are some 75,000 people in Iran who are working as porters- many of whom are students- and risking their lives for a pittance.

A porter will carry goods across the Iranian border through mountainous areas on their back (as in many instances, no vehicle could make the journey) in order to make a living. It is believed to be very widespread amongst students in border towns, as assessed by Ali Mohammad Zadeh, a teacher.

The problem is that the area is treacherous- a number of young porters died during an avalanche in the winter of 2016- and the Regime’s security forces are so opposed to this porterage that they have killed many themselves upon catching them.

The reason for this is that the Iranian Revolutionary Guards Corps (IRGC) are the biggest smugglers in Iran and they don’t want competition. While smuggling may be illegal in Iran (unless you are in charge), these porters are often denied a fair trial and slain by the Regime on the side of the road.

In August and September, there were demonstrations in the cities of Baneh and Sanandaj to protest the extrajudicial killings of two young porters but the Regime just arrested the protesters. As is all cases, the Regime’s answer to a problem is repression.

In 2016 alone, there were over 60 deaths of porters whilst working; 42 were shot by the Regime, 22 died from accidents (a fall), adverse weather conditions (snow), or illness (hypothermia).

The area that they cross is also covered in unexploded landmines left over from the Iran-Iraq war, meaning that one wrong step could mean death.

Even if they survive, porters face many more threats to their wellbeing.

Khezri said that porters will carry an average of 220 kg of goods during each trip (to maximise on earnings as each trip takes a few days) and face physical problems like neck, back, and knee complaints.

Worse still, many fear going to the doctors in case they are found out and are risking their health for years to come.

So why are so many prepared to take the risk? Extreme poverty.

While unemployment and low wages are common across Iran, it is even more pronounced in the border towns when the marginalised Kurdish people live. The official unemployment rate there is 20% but the figure is believed to be between 40 and 50%.

The Regime could do something about this but refuses to because they just don’t care about the people of Iran.

China to send lower-level envoy to talks on Iran

Reuters: China has decided to send a lower-level official...