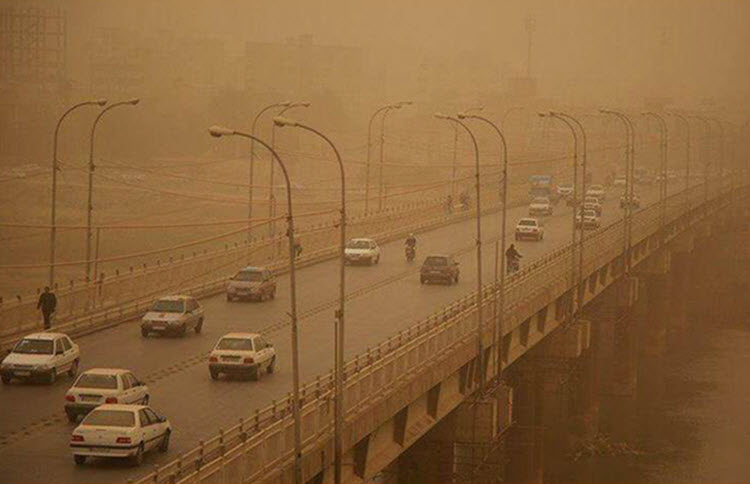 London, 1 May – In parts of Iran, especially in the oil-rich southwestern province of Khuzestan, sand and dust storms are growing in intensity and frequency.

Residents are being forced to move to cities where the weather conditions are bearable, says Javad Kazem Nasab Albaji, an MP from the Khuzestan capital, Ahvaz. State-run Iran Labor News Agency (ILNA), cites Albaji as blaming “dust particle centers” for the outward migration from his province.

For the past 13 years, sand and dust storms in parts of southwestern Iran have caused the closure of schools, government offices, and businesses. Ordinary life must pause during these periods, and residents worry about the impact of the storms on their health.

The exact cause of the increase in storms is unknown. However, dam construction has been accelerated and water resources are diverted for agriculture. This is thought to exacerbate problems in the region.

In February of this year, Ahmadreza Lahijanzadeh, chief of Khuzestan’s Department of Environment, told local news agencies that drought spells and low precipitation in the area were making the storms more intense. The Tehran Times quoted Lahijanzadeh as saying on February 14th, that Khuzestan’s average precipitation has decreased to two millimeters compared to 220 to 250 millimeters in years past.

The head of the National Project for Fighting Sand and Dust Storms, Mohammad Ali Tahmasbi, said that average precipitation has dropped by sixty percent during the March 2017-March 2018 Persian calendar year, as compared to last year.

Elites are leaving his province, Albaji says, causing it to experience an economic downturn. He says that the dust causes health problems, including pulmonary diseases and cancer.

Omid Hojjati, the head of the province’s Management and Planning Department, supports Albaji’s view. “Most of the people leaving Khuzestan are either elites affiliated with the sciences and universities or those rich enough to afford to leave,” he said in an interview with local website KhuzNews. Hojjati added that within the last year, Khuzestan experienced 235 days of unhealthy weather, saying, “Bad weather conditions have decreased the province’s population.”

Despite being the country’s fifth most populace province and the most important in terms of agriculture, Khuzestan is suffering from a “brain drain” and a lack of specialists, according to local senior officials.

Hedayatollah Khadami, another MP from the province said, “Within twenty years, all of Khuzestan’s residents will have left.”

The problem is not taken seriously by the government, as evidenced by the paltry budget allocated to tackle the worsening situation, according to what MP Abbas Papizadeh told state-run news website IRIB. Some 22 Iranian provinces experience regular sand and dust storms, but, “At this rate, nothing will improve for at least 10 years,” he said. “While Khuzestan has been struggling with these dust storms for the past 16 years, the government only began addressing the problem within the last year. Even after a 2002 UN report warning about the grim future of the province, nobody took it seriously.”

Drought and poverty have caused several Iranian villages in the North Khorasan and Isfahan provinces to be completely abandoned. The villagers have gone to urban centers, and poverty-stricken city slums are growing around cities across Iran.

President Hassan Rouhani and other senior officials blame Turkey and Iraq for the recent storms, calling out unchecked construction and water diversion. Still, it cannot be denied that Iran’s wealth has been spent on the export of terrorism and and its involvement in wars in the region, while its people continue to suffer.

Iran to be offered deal over nuclear programme

Reuters: An Iranian diplomatic note gives no sign that...