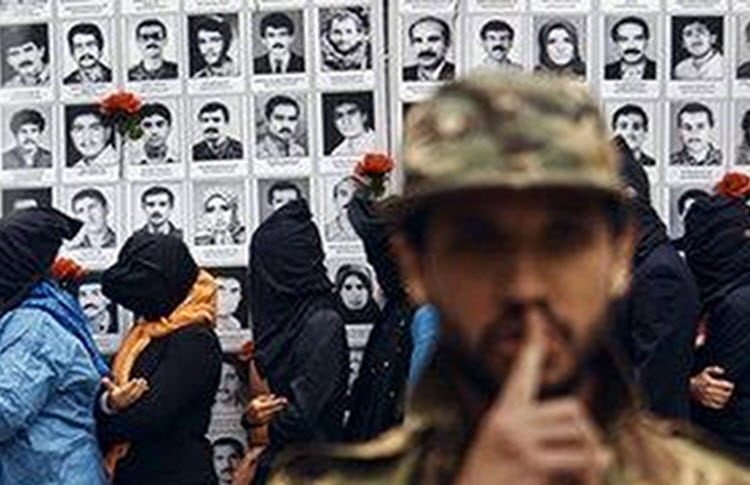 Last week, the US House of Representatives held debate over a bill that would impose new sanctions on the Islamic Republic of Iran for its longstanding record of human rights violations and hostage-taking. The bill was introduced by Homeland Security Committee Chairman Michael McCaul and quickly acquired 46 co-sponsors, including both Democrats and Republicans.

Notably, as Iran Human Rights Monitor pointed out on Friday, the addition of an amendment by Ted Poe, the chairman of the Subcommittee on Terrorism, Nonproliferation, and Trade, made Resolution 4744 the first potentially binding congressional resolution to include language referring to the massacre of Iranian political prisoners in 1988.

That year, at the conclusion of the eight-year Iran-Iraq War, Ayatollah Khomeini issued a fatwa aimed at rooting out domestic opposition to the theocratic system in which he served as the first supreme leader. By declaring opponents of that system guilty of waging war against God, Khomeini set the stage for the mass execution of political prisoners who refused to disavow their dissident political affiliations.

The People’s Mojahedin Organization of Iran constituted the main target of those executions, and it has long since reported that an approximate total of 30,000 political prisoners were killed in the summer of 1988 alone. New details of the killings emerged in 2016 when a recording surfaced in which Ayatollah Hossein Ali Montazeri, then Khomeini’s prospective replacement at the head of the regime, condemned the killing of teenagers and pregnant women as part of the “worst crime of the Islamic Republic.”

The precise scale of the killing remains unknown, largely because many victims were buried in secret mass graves. The scarcity of information about these graves has arguably frustrated domestic and international efforts to hold Iranian officials accountable for what has been called the worst instance of mass execution since World War II. Accordingly, the Iranian regime has made a concerted effort to prevent the discovery of mass graves or other information about the 1988 massacre.

Montazeri’s son Ahmad was sentenced to six years in prison after he was held responsible for releasing his father’s recording and sparking unprecedented public discussion of the massacre. Some officials responded to the newfound publicity by defending the killings, and then-Justice Minister Mostafa Pourmohammadi declared that he was proud of the role he had played as a member of Tehran’s 1988 “death commission” when he helped fulfill “God’s command” of death for the PMOI.

Since then, however, the regime has apparently resumed its efforts to keep a tight lid on information about the incident. And this naturally includes ongoing efforts to frustrate any and all attempts to uncover mass graves. As the Associated Press reported on Sunday, this trend was the focus of a joint report by Amnesty International and the British-based organization Justice for Iran. The report highlights photographic and satellite imagery as well as eye-witness testimony regarding the site of seven mass graves, but it also claims that 120 such locations have been reliably identified over the years.

Of the Iranian government’s efforts to further conceal the graves in question the report says, “The actions include: bulldozing; hiding the mass graves beneath new, individual burial plots; constructing concrete slabs, buildings or roads over the mass graves; and turning the mass grave sites into rubbish dumps. In at least three cases, the authorities appear to be planning actions that would further damage the mass graves.”

While there is no immediately apparent evidence that this upward trend in concealment efforts has been spurred by the 2016 revelations or by references to the massacre in pending legislation, it is true that Amnesty International and other human rights defenders have warned about the potential impact of concealment on future efforts to bring the perpetrators of the massacre to justice.

The imperative of doing so may be amplified by the perception of connections between the 1988 mass executions and recent developments within the Islamic Republic. On Friday, the Center for Human Rights in Iran reported that over 100 indictments had been handed down for individuals who participated in large-scale anti-government protests in late December and January. According to the Iranian judiciary, an unspecified number of these indictments are for “national security” crimes, and the judiciary had previously warned that protesters could face death sentences.

Iranian government officials acknowledged more than 4,000 arrests having taken place in the midst of the nationwide uprising, but the National Council of Resistance of Iran determined that the actual figure was roughly twice that. Tehran also boasted that many of the arrestees had been promptly released, but reports of the recent indictments render this fact all but meaningless since they specify that some of those who had been released were summoned back to court, where they were informed of serious charges.

In view of the scale of the arrests and the seriousness of the charges, there is grounds for concern that hundreds of peaceful protesters could be facing execution in the near future, in a somewhat smaller-scale repeat of the 1988 massacre. This underscores the fact that many of those who are currently urging investigation of the 30-year-old killings are doing so on the assumption that prosecution and publicity will help to safeguard against further such human rights abuses by a regime in which many of the massacre’s perpetrators continue to hold positions of power and influence.

Reuters: The European Union may approve fresh sanctions against...

Over 400 Protests in Iran in March

By Pooya Stone There were over 400 protests and...