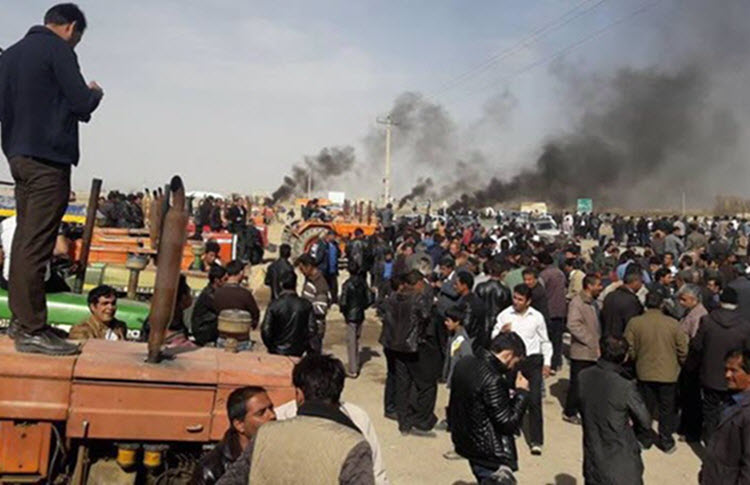 London, 20 July – Farmers in Iran are protesting the government’s failure to deal with the severe drought problem that has left many unable to grow crops to feed the people.

Just outside the city of Varzaneh, farmers have been gathering on a daily basis, next to a dry canal that once irrigated their farms, to plead for help from the mullahs, while holding up signs that read “How long will you eat your bread made with our blood?”.

Protester Mostafa Benvidi said: “We are the people. Help the people. At night they go to bed hungry!”

These protests, which form part of the nationwide Iranian uprising, have only grown in recent weeks despite a violent crackdown by the mullahs. Benvidi, 30, lost sight in his left eye and suffered more than 100 pellet shots in his body as a result of clashes between police and farmers in March, when the farmers held a sit-in strike in Varzaneh.

In early July, 11 protesters were wounded in Khorramshahr when police broke up a protest by residents over the brown water coming from their taps.

The people are angry that a drought, which is affecting about 97% of the country and the most sever for 30 years, is being ignored by the mullahs and even exacerbated by their mismanagement and corruption.

Benvidi said: “Officials just come and promise to deal with the crisis and then just leave.”

He and his family used to survive on their 3-hectare farm, but they haven’t been able to farm in years because of the water shortage, which means they are reliant on seasonal construction work.

While most of Iran suffers from drought, the south has been hit particularly hard, but natural disaster has been made worse by a government that diverts water to ethnically Persian areas of Iran and to factories and steel mills rather than farms.

Reza Khalili, an environmental activist in Varzaneh, said: “The water cycle has been annihilated. The entire water of the river has been allocated to industry.”

One of the concerning side effects is that with the Gavkhouni wetlands drying up and sandstorms a regular occurrence, more Iranians are being exposed to the dangerous chemicals in the earth, like mercury, lead and cadmium.

Hamid Safavi, a professor of water resources management and environmental engineering at the Isfahan University of Technology, said: “More social conflict may be on the way. Officials do not have the necessary expertise to manage water resources… [Unless policies change,] we are heading from a water crisis to a disaster. This is not conjecture. It is a certainty.”

Reuters: Iran and the European Union will hold talks...