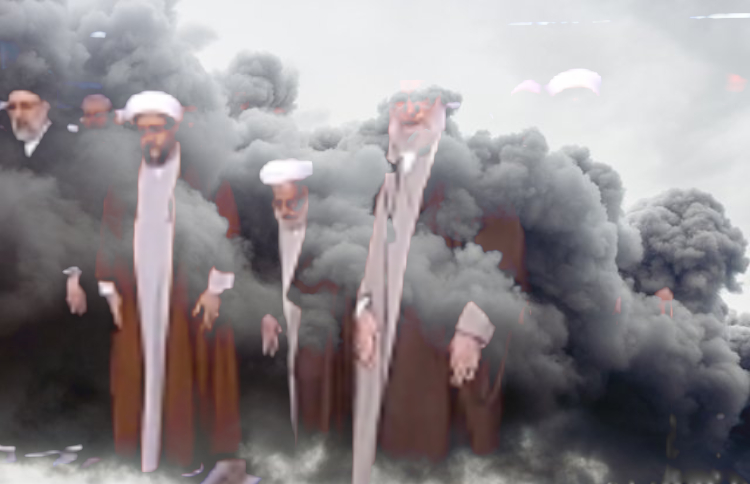 While the world endeavors to find a solution against the Coronavirus pandemic, the Iranian regime has at the same time been plagued by huge and parallel problems that have no solution at all.

The virus that spread from China a few months ago has now crossed all borders and there are few countries that are now safe.

Iran is also one of the countries that, due to the hidings and a series of deceitful behaviors by the regime and of course playing with people’s health and lives, has now the highest record in deaths and infected people following the death toll in China, with the World Health Organization warning of the rapid growth of the disease in Iran, bolstering the ability of the mullahs’ regime dealing with the disease, and decided to send a delegation to Iran to investigate its causes.

As the Coronavirus is spreading fast in Iran, the rulers’ inattention and secrecy have put many Iranians at risk.

The state-run media Arman on 29 February, citing this secrecy, wrote:

Unfortunately, we are still plagued by carelessness and secrecy, and still, ministers and deputy ministers are ignoring global experience, make baseless comments and react mentally and politically.

Aggravating Factors of the Concerns

The first and perhaps most important factor is the contradictions regarding the prevalence of this virus in Iran.

Conflicting statistics from various authorities about the number of people infected with the coronavirus and the dead have made people untrusting of the state-run media and have led the people to the sharing of news about the situation in social media. And this act has caused people to become more aware of the spread and risk of the coronavirus.

The next factor is the mistrust of the people to the regime’s ability to deal with the coronavirus scientifically and correctly.

Although Qom city was the center of the coronavirus, while the city was not being quarantined by the officials, it has now spread to most provinces and has become extremely difficult to combat.

Even more ridiculous is the ludicrous response that Deputy Minister of Health Iraj Harirchi has given to reporters regarding Qom’s lack of quarantine.

He said, “We do not agree with Qom’s quarantine; quarantining belongs to pre-World War I and was for the plague and cholera, and now the Chinese are not satisfied with the quarantine that has been made.” (ISNA, 23 February)

Another major factor contributing to the rapid growth of the virus in the country is the lack of medical staff and their preparation as well as the lack of hygienic substances such as masks and disinfectants.

Since the outbreak of this disease in Iran, masks and disinfectants have become scarce in the country and, if found, they are sold at multiple prices.

Lack of disease diagnosis kits in hospitals is also one of the main problems of the treatment centers in dealing with this epidemy and rapid care of patients.

Many patients with the coronavirus had no early symptoms and were sent home without tests, resulting in their deaths.

Why the regime insists on the relationship with China?

But the question is why, after weeks of reports of the outbreak in China, the regime continues to insist on continuing its relationship with China, and Mahan Air’s traffic belonging to the IRGC continues., Although Government officials are denying it, it is clear that the government wants to use the spread of the virus in China as an alibi and expand its political and economic relationships with China in the hope to have China’s vote on the FATF. But China which headed the Financial Action Task Force did not do much, and the regime was dismayed.

Admitting to the Critical Situation

Being on the FATF’s blacklist would bring a lot of financial trouble for the regime. Even though Abdolnaser Hemati, the head of the central bank and several regime officials have dismissed the listing as trivial, and the question here is why are they doing this?

“We are so in trouble that getting blacklisted doesn’t really make a big difference in dealing with the world. Given that banks and foreign companies were unwilling to engage with the Iranian economy, Iran’s return to the blacklist was not a new and important event,” said Hassan Forouzanfar, a member of the Chamber of Commerce. (IRNA, 28 February)

Although this is in itself an admission of the critical situation of the country’s economic crisis, and banks and reputable companies had cut ties with the regime prior to the FATF decision, it is important to note that there are few banks that still insist on cooperating with the regime, because of this relationship, because they can be forfeit for money laundering and be trialed.

As a result, the regime’s exports to Iraq, Turkey, and Afghanistan were stopped. Iraq imported $650 million a month and Turkey $400 million from Iran.

Also, due to the spread of the coronavirus, the economic damage to various businesses and all segments of the society within the country is widespread: Restaurants, self-service, bars, cafes, airlines and travel tours, hoteliers, cultural and leisure centers such as cinemas and theaters. They are all in crisis.

To this point, the regime’s dreams of overcoming its crises in the hope of “resilience” until the US election has not worked, and Iran’s regime is stuck with the nightmare of multiple crises.