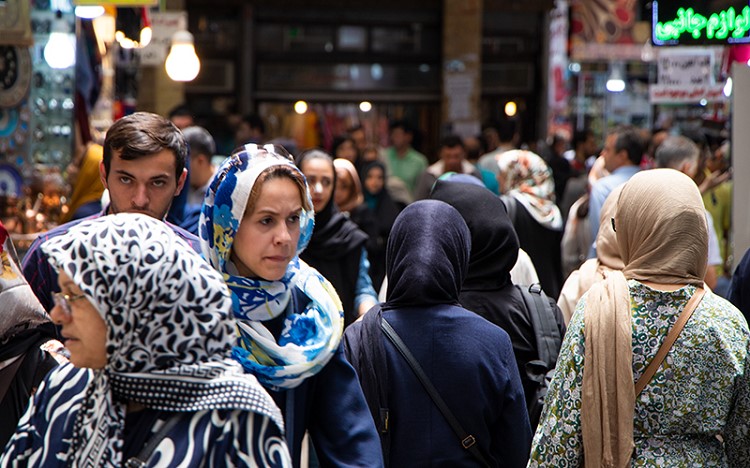 In November, “an absolute world war against the system” was run, according to Commander of the Basij Paramilitary Group, a subsidiary of the Revolutionary Guard (IRGC) Salar Abnoush, who had a direct role in the crackdown on nationwide protests.

“As someone in the streets, I believe only God saved us,” ISNA news agency quoted Abnoush as saying on November 20, 2019.

In his report, Abnoush revealed moving truths from the scene and behind the scenes of the November uprising. He said everyone thought that the supreme leader Ali Khamenei would support deprived people due to the extreme poverty and hardship in society. However, Khamenei, on the contrary, approved the increase in the price of gasoline and stunned the world!

“Several are arguing why the supreme leader defended the gas price hikes. In response, we say that we are all in trouble, but he was more upset than us. Were it not for the supreme leader’s orders, seditionists’ demands would have been met. Because they thought that the leadership would object to the pressure on the weak people, but he deliberately foiled their plans,” Abnoush said.

He later provided a list of the government’s achievements in improving the bomb and missile industry and establishing extremist proxies in the Middle East.

“Abnoush was asked why do citizens face many livelihood problems despite the government that has precise missiles and NANO technology? ‘The country’s organs have not grown inconsistently, and some part remained to disable,’ Abnoush responded,” according to ISNA.

What Was the Ratio of Unemployment and Inflation to the Intensity of the Protests?

The mentioned inconsistencies were the main reason for the November 2019 uprising, which led to an “absolute world war” against the ruling system. In fact, the inconsistencies are the outcome of the 41-year systematic corruption and suppression, which are potential to ignite a new round of protests against the ayatollahs’ rule at every second.

Numerous protests by Iranians in 2018 and 2019 were rooted in economic problems, including the high rate of unemployment and poverty among the young generation. The sum of these parameters is “misery.” In this respect, non-profit international bodies provided reports about Iran’s misery level in November 2019.

Iran’s Rise to the Global Rankings of the Misery Index

In the 1970s, an American economist Arthur Melvin Okun introduced the Misery Index. By adding two indexes of unemployment and inflation to previous assessments, he tried to show the socioeconomic expenditure that is imposed on ordinary people by high prices and unemployment.

Iran overtook Argentina to reach the second rank in the world in terms of misery index. Venezuela is still in the first place, but Iran took second place from Argentina with a 41.1 percent inflation rate in November and a 10.5 percent unemployment rate at the end of the summer of 2019.

Iran’s misery index is currently 51.6 percent. Argentina’s unemployment rate is 10.1 percent and the country’s inflation rate is 50.5 percent, with its misery index at 50.6 percent.

In September, an examination of the provincial inflation rate announced by the Statistics Center of Iran as well as the provincial distribution of the unemployment rate shows that among the provinces of Iran, the misery index in Chaharmahal and Bakhtiari, Lorestan, Kurdistan, Khuzestan, Sistan and Baluchestan, and Ilam provinces has reached over 60 percent.

In this respect, four provinces with a misery index over 60 percent, including Khuzestan, Sistan and Baluchestan, Kurdistan and Kohgiluyeh and Boyer-Ahmad provinces are among the eight provinces that have witnessed the bloodiest protests.

Therefore, the rest of the protests in Iran raised from the poorer areas who have been deprived of basic rights in addition to systematic suppression. Contrary to officials’ claims about their public support among underprivileged, these citizens have held most protests in 2019 and are the victims of unrestrained corruption, embezzlement, and nepotism.

What Is the Misery Rate in the Provinces of Iran?

The lack of accurate, reliable information and statistics is one of the most important analytical obstacles to assessing Iran’s economic situation. However, it is possible to achieve a view of the people’s condition among selected details provided by several state organs and institutes.

The provinces of Lorestan, Kurdistan, Chaharmahal and Bakhtiari, and Kermanshah are at the top of the misery table, according to the latest stats of the Statistics Center of Iran about the provincial index of unemployment and inflation.

“According to the latest statistics on inflation and unemployment among the country’s provinces, studies show that the misery rate in Lorestan and Kurdistan provinces is in the worst condition,” the Tejarat News website wrote on May 3.

Tejarat News’ studies calculated the misery rate index based on the latest unemployment rate in the winter of 2019 and the inflation rate in April 2020. Therefore, the country’s misery rate has reached 42.8 percent, according to the studies.

“Among the provinces of the country, Lorestan province is known as the poorest province with a misery rate of 53.8 percent. In this context, the unemployment rate is equal to 16.8 percent and the inflation rate is equal to 37 percent. The provinces of Kurdistan and Chaharmahal and Bakhtiari are next in line with a misery rate of 51.6% and 48.7%, respectively,” Tejarat News added.

Notably, the studies exposed the Fars province with 36.2 percent is the richest Iranian province, and Semnan and Khorasan Razavi are ranked after Fars with a misery index of 38.8 and 39.1 percent.

In reality, Iranian citizens suffer from an economic virus that left them in misery, poverty, and unemployment amid the coronavirus outbreak. In this context, the casualties of the economic virus that has spread through the ayatollahs’ mismanagement and insufficient are not less than the COVID-19.

On the other hand, impoverished segments of society are directly exposed to the rulers’ merciless economic policies. However, this flagrant tyranny is likely to prompt the protests that are more severe than what the authorities experienced in November and January. In this context, officials’ constant remarks blaming and warning each other about the next violent protests prove the volatile situation of Iran’s society.

Reuters: The U.S. military in Iraq is seeing an...