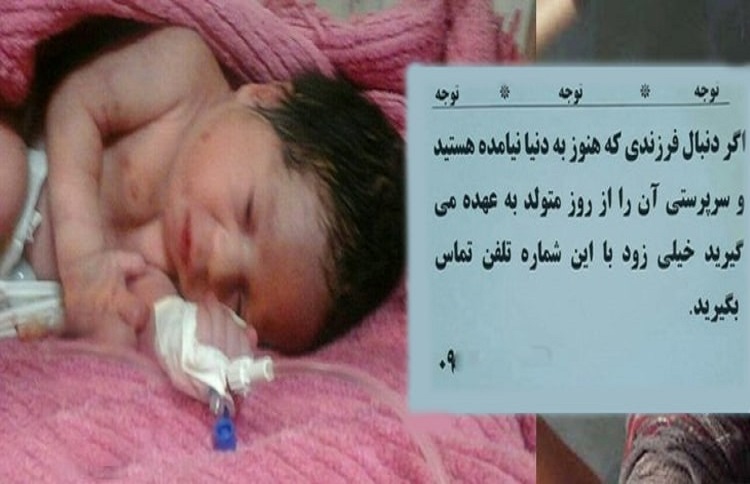 The selling of babies in Iran is one of the social problems that has spread its ominous shadow over the Iranian family and society during the rule of the Velayat-e-Faqih (clerical) regime.

The shocking and unbelievable headline of the sale of babies in Iran in recent years, about which there has been a lot of news in cyberspace is annoying the human psyche and mind.

On 14 May, the news of the arrest of people who were dealing with babies in Golestan province was published.

Although this is one of the many cases of dealing with babies that are made public and published by the media, this example alone shows a tragedy that shows a lot of bitterness in Iran and the Iranian family.

A dealer who is selling babies in Tehran said about the family situation of the children being sold: “These children are mostly sold because of the poverty and lack of families. We really can’t get accurate statistics, how the conditions of these kids are, which has been bought or sold.”

A look at this phenomenon revealed us the bitter truth of the disastrous condition of the Iranian families which are dealing with poverty, which is created by the erroneous governmental policies, making the people of a country so poor that the parents of newborn children are forced, just to stay alive, to sell their child.

Soheila Jeloudarzadeh, a member of the Social Commission of the regime’s parliament, recently mentioned the sale of babies in the country: “Since this is a crime and is done in secret, we do not have official statistics unless we investigate it through arrests and complaints to reach an approximate number.”

“Given the poor economic conditions, we are witnessing the sale and purchase of babies and even older children,” she added.

Poverty in Iran is also a phenomenon that shows the direct role of the corrupt rulers of the clerical regime, while in a country that is rich in oil and gas, resources and mines, its citizens are forced to endure this tragedy due to poverty.

The latest confession by a senior official, Heshmatollah Falahatpisheh, a member of the National Security and Foreign Policy Commission of the parliament, is enough to show the corrupt activities of the regime as he said: “With 200 billion tomans a day, which is obtained only by raising the price of gasoline… 200 billion tomans a day is the average income that comes from raising the price of gasoline and selling excess consumption abroad… We can give 200 billion a day to different provinces to solve their own problems.”

He referred to his trip to Syria and said: When I went to Syria, some people said I incurred costs. But I repeat, we may have given Syria $20 billion to $30 billion, and we must take it back from Syria. The money of this nation has been spent there.” (Etemad online, 20 May)

The sale of the baby has become so legitimate in the clerical regime that in recent months there have been reports that there is a model of child buying called “birth-centered” and that work is being done from the birth hospital.

Habibollah Masoudi Farid, the social deputy of the welfare organization, has said about this: “We had several meetings with hospital staff to deal decisively with those who try to buy and sell children from hospitals.”