Washington Post: A rebel attack on Hezbollah targets inside Lebanon could have broad regional implications. Hezbollah is closely allied with Iran, which is one of Assad’s strongest backers. The Syrian rebels, on the other hand, have largely been supported by Turkey, Qatar and Saudi Arabia. The Washington Post

By Babak Dehghanpisheh and Ahmed Ramadan 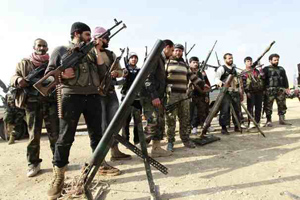 BEIRUT — Syrian rebels on Tuesday threatened to carry out attacks against Hezbollah inside Lebanon, a dangerous escalation of the conflict that could destabilize Syria’s politically volatile neighbor as well as the region.

The heightened tensions on both sides of the border came as four mortar rounds hit one of Syrian President Bashar al-Assad’s palaces in Damascus on Tuesday, according to opposition activists.

The presidential media office issued a statement saying that the mortar rounds had landed near the palace, not inside the palace grounds, without causing serious damage.

A video posted online showed rebel fighters describing the targeting of the Tishreen palace in the northwest section of the capital before firing several mortar rounds with shouts of “God is great.”

There was no statement from either side as to whether Assad was in the palace at the time.

Rebel forces have made a concerted push into the capital in the past 10 days, sparking heavy fighting after several weeks of relative stalemate. Navi Pillay, the U.N. high commissioner for human rights, estimated last week that nearly 70,000 people have been killed in the war.

And in another sign of the heavy toll that the conflict has taken on civilians, the World Health Organization announced Tuesday that about 2,500 people have been infected with typhoid in northeastern Syria because of unsanitary conditions.

Tuesday’s threat to bring the fight to Lebanon, issued by the Free Syrian Army, came after several days of clashes between Syrian rebels and militants from Hezbollah around Qusayr, a Syrian town near the Lebanese border, and a handful of smaller villages in the area, according to the rebels. Hezbollah has not officially responded to the Free Syrian Army statement.

Hezbollah is the most powerful military and political force in Lebanon, and it runs an extensive network of social programs. Last fall, Hezbollah leader Hasan Nasrallah acknowledged that some of the organization’s military personnel were inside Syria, but said they were not involved in combat.

A rebel attack on Hezbollah targets inside Lebanon could have broad regional implications. Hezbollah is closely allied with Iran, which is one of Assad’s strongest backers. The Syrian rebels, on the other hand, have largely been supported by Turkey, Qatar and Saudi Arabia.

There also is a potentially explosive sectarian dynamic as Hezbollah and Iran are both predominantly Shiite Muslim while most members of the Syrian opposition — and the bulk of their foreign backers — are Sunni Muslim.

Although Syrian rebels say Hezbollah fighters are involved in clashes in Syrian territory, the Free Syrian Army’s warning Tuesday specifically addressed the issue of shelling from Hermel, a town in northern Lebanon where Hezbollah has many supporters. The rebels say Hezbollah militants fired rockets from the Hermel area in support of operations carried out by the Syrian military just across the border.

The rebels gave Hezbollah 48 hours to stop the shelling or face retaliation.

“If the Hezbollah shelling on the Syrian land, on the villages and unarmed civilians, from inside the Lebanese land does not stop in the next 48 hours from the release of this statement, we will take matters in our own hands to respond to the source of the shooting and stop it inside Lebanese territory,” the statement said.

Videos posted online of the recent fighting in Qusayr purportedly show Syrian rebels firing rockets toward Hezbollah positions. In some of the videos, fighters refer to the Hezbollah militants with a derogatory name for Shiites.

Rebel fighters say several Hezbollah militants have been killed in the recent clashes, which appear to be the worst fighting in the border area since the Syrian conflict began nearly two years ago.

“If Hezbollah does not stop its land invasion, which is accompanied by covering fire, we are allowed to retaliate according to international law. We can retaliate to any fire coming across the borders,” said Loay Meqdad, an Free Syrian Army spokesman. “And if they do not stop, we will retaliate.”

Suzan Haidamous contributed to this report.

DPA: US Secretary of State Condoleezza Rice on Thursday...

In his article for the August 12 edition of...