Washington Post: Pressure for Europe to declare Hezbollah a terrorist organization increased after a court in Cyprus found a man guilty of helping to plan an attack on Israeli tourists in the island nation. The Iran-backed group, which is also a mainstream political and social movement in Lebanon, is the primary voice of the Shiite community there. The Washington Post 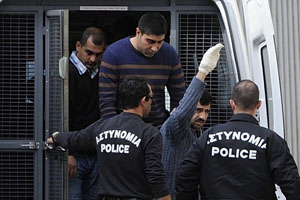 BERLIN — Pressure for Europe to declare Hezbollah a terrorist organization increased Thursday after a court in Cyprus found a man guilty of helping to plan an attack on Israeli tourists in the island nation.

The Obama administration has pushed the European Union in recent months to add the Shiite militant group to its terrorist list, an effort to stymie what the United States describes as rapidly escalating efforts to carry out attacks on Israelis and Iranian-chosen targets around the world. Thursday’s conviction will give new weight to efforts to persuade the 27 E.U. nations to take at least limited action against the group to restrict its ability to raise funds and recruit in Europe, several senior European officials said.

A three-judge panel on Thursday convicted Hossam Yaakoub, 24, a Lebanese-born Swedish citizen, on five criminal counts including participation in a criminal organization, planning to commit a crime and money laundering. Last month, Yaakoub told the court that he had worked as a courier for Hezbollah in Europe but that he had not intended to take part in any attacks.

The conviction, which comes after Bulgaria’s announcement last month that it believed Hezbollah was involved in an attack last year on a bus of Israeli tourists, bolsters the criminal dossier against the group.

Many European countries, particularly France, Spain and Italy, have resisted following the U.S. example of placing Hezbollah on a list of terrorist organizations, cautious that doing so would weaken European influence in Lebanon and jeopardize that nation’s fragile stability. The Iran-backed group, which is also a mainstream political and social movement in Lebanon, is the primary voice of the Shiite community there. But several E.U. nations have said courtroom evidence of criminal Hezbollah activity on European soil would lead them to press for a changed designation in the halls of Brussels, the E.U. capital.

“It’s necessary to do something because it’s obvious that the funding for Hezbollah is coming from within Europe,” said Philipp Missfelder, the foreign policy speaker of Germany’s ruling Christian Democratic Union.

“We cannot ignore” the developments in Bulgaria and Cyprus, he said. “These are member states of the European Union and this is something we have to discuss.”

Yaakoub’s conviction on five of eight charges carries a penalty of three to 14 years in prison plus a fine of up to $645,000, a spokeswoman for the Cypriot Ministry of Justice said. Sentencing will be later this month. In their 80-page decision, the judges declared Hezbollah a criminal organization. Yaakoub was acquitted on three charges, which were subsumed under the five main convictions.

State Department spokeswoman Victoria Nuland said the conviction “underscores the need for our European allies — and other governments around the world — to crack down on this deadly group.”

Yaakoub’s trial and previous statements to investigators provided an unusually detailed window into Hezbollah’s efforts to recruit and train European operatives for what U.S. analysts describe as future terrorist operations. Yaakoub told investigators that he spent three years setting up a juice-importing company in Cyprus as a cover and carefully monitored the comings and goings of Jewish tourists at the behest of Hezbollah. But he denied being involved in terrorist activities.

His capture in July came just two weeks before a bomb attack in the resort town of Burgas, Bulgaria, killed five Israeli tourists and their Bulgarian bus driver. U.S. and Israeli officials quickly drew a line to Hezbollah. Last month, after a seven-month investigation, Bulgarian investigators agreed with them, although they made little of their evidence public.

E.U. foreign ministers could discuss listing Hezbollah as a terrorist organization as soon as their next meeting, possibly in April, one senior European official said Thursday.

“If we have evidence on Hezbollah that can stand trial in court, then we need to list Hezbollah,” the official said. He said a partial designation — declaring that the group’s militant activities were terrorism, but maintaining relations with Hezbollah’s political leadership in Lebanon, as Britain has done since 2008 — would be the likeliest outcome.

The distinction is an artificial one, analysts say, since Hezbollah does not actually divide its organization into military and political wings, but it would give European officials leeway to pursue a travel ban and asset freeze on Hezbollah operatives on their soil without cutting off diplomatic ties to the organization in Lebanon. Germany estimated in 2011 that there were 950 Hezbollah supporters living within its borders. France, bound by history and language to Lebanon, has a larger Lebanese Shiite community than Germany’s.

A listing “would send a European message to Hezbollah that there are red lines, there are consequences, you cannot do these things in Europe,” said Matthew Levitt, a former counterterrorism official with the FBI and Treasury Department who has written a book about Hezbollah’s global activities.

Many European policymakers and analysts still feel that applying the terrorist label to Hezbollah would be counterproductive. By itself, the designation would also hold little practical meaning, they say.

Some officials have suggested simply strengthening law enforcement activities in weaker E.U. countries such as Cyprus, which joined the European Union in 2004, and Bulgaria, which joined in 2007, treating violent attacks from Hezbollah as a criminal matter.

“The dominant argument is that to target Hezbollah might destabilize Lebanon as well as Syria,” said Markus Kaim, a top security analyst at the German Institute for International and Security Affairs, a think tank that often advises the German government. “And in the current situation, anything that might destabilize both countries is not in Germany’s and Europe’s interest.”

Some American analysts say that by putting Hezbollah on the terrorist list, the E.U. would help achieve European and American goals.

“Americans have been working on this and frankly been frustrated about the European approach for a long time,” said Daniel Benjamin, who recently resigned as the State Department’s top counterterrorism official. “This would be an important step in the general effort to see Hezbollah become a political party that is not armed, that is not a state within a state.”

Washington Times: The U.S. subsidiary of a Japanese company...

Reuters: Iran's intelligence minister said on Wednesday he was...