AFP: Governments across the Middle East on Thursday welcomed the ouster of Egypt’s Islamist president Mohamed Morsi with varying degrees of enthusiasm, with war-hit Syria calling it a “great achievement”. By Sara Hussein 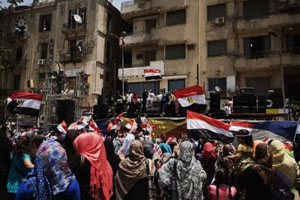 BEIRUT (AFP) — Governments across the Middle East on Thursday welcomed the ouster of Egypt’s Islamist president Mohamed Morsi with varying degrees of enthusiasm, with war-hit Syria calling it a “great achievement”.

In a reflection of tense ties between many regional governments and the Muslim Brotherhood organisation from which Morsi hails, reaction to the Egyptian leader’s ouster was almost universally positive.

Israel and its arch-foe Iran gave muted reaction while in Islamist-ruled Tunisia, the cradle of the Arab Spring that swept through Cairo and eventually brought Morsi to power, President Moncef Marzouki ruled out the risk of contagion.

“Could Tunisia witness the same (Egyptian) scenario? I don’t think so…,” said Marzouki, stressing the need to “pay attention” to “serious economic and social demands” by the people.

In Syria, where forces loyal to embattled President Bashar al-Assad are battling rebels including Islamists determined to topple the regime, an official source hailed the change in Cairo.

“Syria’s people and leadership and army express their deep appreciation for the national, populist movement in Egypt which has yielded a great achievement,” state television quoted the source as saying.

Mass protests that preceded Morsi’s ouster by the army meant the people reject the rule of the Muslim Brotherhood across the Arab world, the source said.

There was similar praise for the Egyptian army from the United Arab Emirates.

Since last year the UAE has been cracking down on Emiratis and Egyptians it accuses of links to the Muslim Brotherhood, and on Tuesday a court jailed dozens of Islamists on charges of plotting to overthrow the government.

Iraqi Prime Minister Nuri al-Maliki also congratulated Mansour and expressed support for the Egyptian people “who are going through a difficult period,” a statement in Baghdad said.

In Israel, which has had a peace treaty with Egypt since 1979 but strained ties, ministers were tightlipped after reportedly being told by Prime Minister Benjamin Netanyahu to refrain from comment.

But an official told AFP on condition of anonymity the government was closely monitoring developments in Egypt, adding that the situation was “causing some concern in Israel”.

Reaction was more muted in Iran, which said it respected “the will of the people” but also called for democratic processes to be respected.

Jordan’s King Abdullah II also congratulated Mansour, saying in a statement: “Jordan supports the will and choice of the great Egyptian people.”

But Jordan’s powerful opposition Muslim Brotherhood called Morsi’s ouster a “military coup” and a “US-led conspiracy”, according to a statement issued after an emergency meeting of the group.

Palestinian president Mahmud Abbas congratulated Mansour and praised “the role played by the Egyptian people… in saving Egypt and adopting a roadmap for its future”.

In Qatar, a key Muslim Brotherhood ally, new emir Sheikh Tamim Bin Hamad al-Thani also sent Mansour congratulations while the foreign ministry said Doha “will continue to back Egypt in its leading role in the Arab and Muslim worlds”.

But pro-government Qatari media carried words of warning for Egypt.

“Egypt has never before been in such a foggy situation… Every political and ideological group now thinks it has the right to rule,” read a commentary in Asharq daily.

Reuters: A Lebanese protester was killed outside the Iranian...