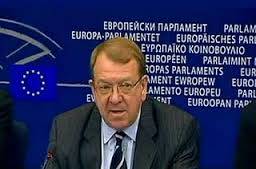 With the progression of time, concerns previously voiced by the Iranian opposition over the presence of Iranian regime forces in Iraq are now being acknowledged and shared by other organisations.

With the progression of time, concerns previously voiced by the Iranian opposition over the presence of Iranian regime forces in Iraq are now being acknowledged and shared by other organisations.

The most recent example of this is the position taken by the European Iraqi Freedom Association (EIFA), which has called on the United State and European Union to evict Iranian armed forces urgently to prevent the region from falling deeper into the pit of sectarian violence.

Sharing his views on the subject in the Huffington Post, President of EIFA, Struan Stevenson, wrote about the disastrous role of Iranian Revolutionary Guards and military forces in conflict-ridden Iraq.

Mr Stevenson endorsed the view of the National Council of Resistance of Iran, that the Islamic Republic is merely concerned with achieving its misguided objectives and not with the welfare of the Iraqi people.

The growing threat of Islamic State (IS) in Iraq and Syria has led to the international community becoming desperate to accept help from those who will do more harm than good. This is turning out to be particularly true for Iran, which is operating with impunity in Iraq under the pretext of countering the IS. In reality, the regime is carrying out activities linked with its own agenda, taking advantage of and exacerbating the crisis in Iraq.

Armed groups backed by the Iranian regime, such as Asa’ib Ahl al Haq, Kata’ib Hezbollah, Badr and Al Quds, have been conducting a genocidal campaign against Sunni population in several Iraqi provinces.

Such barbaric actions ought to blur the line between IS militants and Iran-backed forces, as both are following a sectarian agenda to the detriment of the people living in the region. The murder of Sunnis at the hands of Iran-backed groups will in fact serve to rile emotions in an already sensitive environment.

Not only that, these activities will help the IS in recruiting more members of the Sunni community looking for revenge or protection against their Shia aggressors. Therefore, interference of Tehran in Iraq will eventually prove to be counterproductive and highly damaging, if not curbed in time.

It would the height of naiveté to believe that the Iranian regime is spending billions of dollars and sending forces into Iraq to solely counter IS and assist the Iraqi government. It is all the more important to remember history during times of crises. The US and the EU must not forget what the Iranian regime has and continues to stand for to this day.

Walking across the border will not transform into a peace-seeking friendly ally of Iraq. Increasing influence in Iraq remains at the core of its policy, and the US and EU must wake up to reality and take responsibility for ensuring the eviction of Iranian Revolutionary Guards Corps and armed groups affiliated with the regime. Failure to do so would undermine all their efforts and lead to a greater crisis in the years ahead.

By Jubin Katiraie In remarks that could easily be...

AP: The European Union, concerned by what it called...