AFP: US Vice President Joe Biden on Thursday warned that Iran’s nuclear drive threatens a Middle East arms race as he sought to reassure Europe of its importance as a US ally. 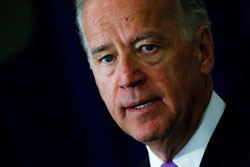 BRUSSELS (AFP) — US Vice President Joe Biden on Thursday warned that Iran’s nuclear drive threatens a Middle East arms race as he sought to reassure Europe of its importance as a US ally.

“Iran’s nuclear programme violates its obligations under the nuclear non-proliferation treaty and risks sparking a nuclear arms race in the Middle East,” said Biden, at the start of a European tour.

“Tehran faces a stark choice, abide by international rules and rejoin the community of responsible nations, which we hope for, or face further consequences and increasing isolation,” Biden said.

The United States and Europe believe that Iran is seeking to develop nuclear weapons. Tehran insists its nuclear programme is peaceful.

But Biden used a speech to the European parliament in Brussels to insist that President Barack Obama’s administration saw a strong and active Europe as an ally.

“The Obama-Biden administration has no doubt about, and strongly supports, a vibrant EU, we believe it’s absolutely essential to US prosperity and security,” he said, while acknowledging European misgivings on some US initiatives.

It was a rare visit to the EU chamber by a high-ranking US official. The last US president to address the parliament was Ronald Reagan in 1985 and Europe has been worried about its standing.

Obama declined an invitation to an EU-US summit in Spain, scheduled for this month, adding to doubts among European leaders that Washington is looking more across the Pacific to China and Asia than across the Atlantic to Europe.

EU officials painfully recall the global climate change conference in Copenhagen in December, when Obama preferred to negotiate directly with China and India on an agreement to cut emissions. Europe, which prides itself as being at the forefront of the climate challenge, was left on the sidelines.

Obama’s absence from commemorations in Germany in November to mark the 20 years since the fall of the Berlin Wall was also noticed.

Biden spoke for 30 minutes to generous applause from European parliament members, particularly when he spoke of the US administration’s decision to end hardcore interrogation methods used by the CIA and to close the notorious Guantanamo Bay prison in Cuba.

However Biden stressed the need to reintroduce a controversial programme by which US authorities had access to data on European bank transactions as part of their “War on Terror”.

A previous framework covering the exchange of information on tens of millions of Europeans held by banks and other bodies broke down in January amid rows over protection of liberties, and was vetoed by the European parliament.

“I am absolutely convinced that we can succeed to both use the tool and guarantee privacy,” Biden told the lawmakers.

The system was introduced after the September 11, 2001 attacks in the United States to help tackle the financing of terrorism.

It was vetoed at the end of last year by the European parliament which demanded stricter protection of personal information, to limit the bodies that could access it and ensure it was used only for anti-terror purposes.

“I don’t blame you for questioning it, we understand your concerns,” Biden told the lawmakers.

But he said that “the longer we are without the agreement, the greater the risk of a terrorist attack that could have been prevented.”

New York Review: The story most media accounts tell of...