AFP: Parliament speaker Ali Larijani on Wednesday called on Iran’s government to push ahead with its controversial programme to enrich uranium to 20 percent, despite being slapped with fresh UN sanctions. 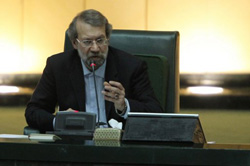 TEHRAN (AFP) — Parliament speaker Ali Larijani on Wednesday called on Iran’s government to push ahead with its controversial programme to enrich uranium to 20 percent, despite being slapped with fresh UN sanctions.

“The Iranian parliament demands that the government continues producing 20 percent enriched uranium and not stop it at all as some countries have not adhered to the NPT (nuclear Non-Proliferation Treaty) and did not provide fuel for the Tehran research reactor,” Larijani told parliament.

“The bullying countries must understand that their illogical pressure will be proportionately reciprocated by the level of our uranium enrichment which would depend on our needs,” he was quoted as saying on parliament’s website.

Lawmakers chanted “Allahu Akbar” (God is greatest) in the assembly as Larijani made his defiant statement on the sensitive issue, ISNA news agency reported.

Enriching uranium is the most controversial aspect of Iran’s nuclear drive and the UN Security Council on June 9 imposed a fourth set of sanctions on Tehran for refusing to abandon the programme.

Iranian officials have maintained Tehran will keep enriching uranium to 20 percent after the West cold-shouldered a proposal brokered by Brazil and Turkey which aimed at providing the enriched material for the Tehran research reactor.

Larijani also dismissed the new round of sanctions and warned the United States and other countries against searching Iranian ships and planes as specified in the latest punitive measures.

“I am warning the adventurous America and other countries that in case they are tempted to inspect the cargo of Iranian ships and planes, they should rest assured that we will do the same with their ships in the Persian Gulf and Sea of Oman,” the conservative speaker said.

“This retaliation is part of defending our national interests,” he said amid chants of “Death to America!” and “Death to Israel!”.

Around 40 percent of world oil supplies pass through the Gulf and the Strait of Hormuz.

The UN sanctions authorise states to conduct high-sea inspections of vessels believed to be ferrying banned items to or from Iran.

They also provide for cargo inspections, both in any port or at sea, if there is reason to suspect a ship is carrying conventional arms or nuclear missile items for Iran.

The sanctions resolution obligates states to seize and dispose of any prohibited items that are found in such cargo.