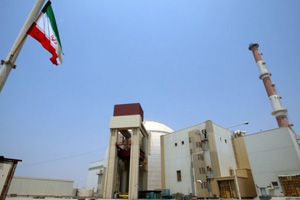 On August 21 Iran began loading the fuel rods, also supplied by Russia, into the nuclear power plant located in the southern port city of Bushehr.

The entire loading of the 163 fuel rods into the plant was to be completed by September 5, after which it was to be transferred into the reactor.

But late on Monday state news agency IRNA quoted Salehi as saying that it will take another two weeks to shift the rods into the plant itself.

“From now on it will take 10 to 15 days for the 163 fuel rods to be moved into the main building of the Bushehr nuclear power plant and then we have to transfer the fuel rods into the reactor,” Salehi said.

Salehi blamed Bushehr’s “severe hot weather” for the delay in moving the rods into the plant and said that this work was being done during night time.

Iranian officials have earlier said that the Bushehr plant’s actual commissioning is expected in October or November when the electricity it generates is connected to the national grid.

Russian officials have said the loading of the fuel into the plant marked the physical launch of the facility, the construction of which initially began in the 1970s under the rule of the late shah.

Despite being OPEC’s second-largest crude oil exporter and having the world’s second-largest gas reserves, Iran insists it needs nuclear power for a rapidly growing population and for when its fossil fuels eventually run out.

Meanwhile Salehi said Iran has received a “positive” response from Russia to its proposal of making nuclear fuel jointly in both countries.

“So far the Russian response has been positive to the Iranian proposal,” he said of the plan which he revealed on August 26.

“But any comprehensive and complete response depends on future negotiations and further study. We hope that the positive signals from the Russians will lead to the signing of an agreement.”

Iran is under four sets of UN Security Council sanctions for its refusal to halt uranium enrichment — the process which can be used to make nuclear fuel but also the fissile core of an atom bomb in highly purified forms.

Russia, despite being Iran’s long time nuclear ally, had also voted for the latest round of UN sanctions against Tehran, a move which had triggered angry response against Moscow from top officials of the Islamic republic.

Salehi also said that Iran was testing second and third generation of centrifuges, the device which rotates at supersonic speed to enrich uranium.

“The testing phase could take one to three years… The testing is on experimental basis and not on an industrial production scale.”

Iran currently enriches uranium at its facility in the central city of Natanz in defiance of UN and world powers.

The Independent: Iran could take retribution against British troops...