Church Times: Britain should take action over the applications of vulnerable Iranian residents of Camp Liberty in Iraq, who are seeking relocation in this country, an MP said this week.
Church Times 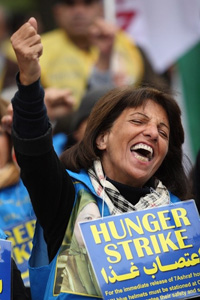 Britain should take action over the applications of vulnerable Iranian residents of Camp Liberty in Iraq, who are seeking relocation in this country, an MP said this week.

Dr Matthew Offord, the Conservative MP for Hendon, and a member of the British Parliamentary Committee for Iran Freedom, said that the applicants had previously lived in Britain.

There were currently 3174 people in Camp Liberty, mostly members of a resistance group, the People’s Mojahedeen of Iran (PMOI). The most recent attack on them, on 1 September, had killed 52 people, prompting a hunger strike by Iranians, including some living in Dr Offord’s constituency (News, 11 October).

Camp Liberty was “completely unacceptable”, Mark Williams MP, another member of the Parliamentary Committee, said on Wednesday. “These people cannot realistically go home, so there is an international obligation there, and this country should play a part.”

Lord Carlisle, who chairs the British Parliamentary Committee for Iran Freedom, which met at an event on Iran in Church House on Monday, said: “Illustrating its violent and intolerant approach to political opposition, the Iranian regime continues to order Iraq’s Maliki government to attack and slaughter Iranian dissidents inCamps Ashraf and Liberty.” He urged the UK Government, the US, and the UN to press for the immediate release of seven people taken hostage by the forces of the Iraqi Prime Minister, Nouri al-Maliki.

The Parliamentary Committee issued a statement arguing that the President of the United States should refuse to meet Mr al-Maliki until the Iranian residents of Camp Liberty were properly protected, and the missing seven were released. Mr al-Maliki is due to meet Mr Obama in Washington today.

Lord Carlisle said that the Government should press for an independent international commission of inquiry into “the heinous massacre in Camp Ashraf”.

On Wednesday of last week, the General Secretary of the UN, Ban Ki-Moon, urged member states to offer relocation to these residents, and to contribute to a trust fund to cover the costs of the relocation process. Currently, only ten per cent of those in the camp have received offers of relocation.

AFP: Iran is ready to accelerate its nuclear activities...